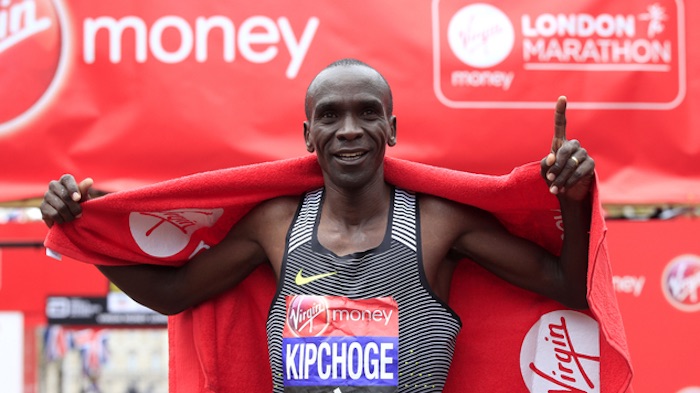 Eliud Kipchoge will face Mo Farah when he returns to the Virgin Money London Marathon on April 22 targeting a hat-trick of wins in the capital.

The Olympic Champion won in 2015 and again in 2016. In his second London Marathon win the Kenyan star was an agonising eight seconds away from the current world record of two hours two minutes and 57 seconds.

“The London Marathon is a race that holds very special memories for me,” said Kipchoge, 33, the greatest marathon runner of his generation. “I won it in 2015 and 2016 and both are days that I will never forget.

Kipchoge is the second big name to be added to the men’s elite field for the 2018 London Marathon after Mo Farah was announced.

Farah is following a familiar path from the track to the marathon with Kipchoge by far the most successful convert of his generation.

“It does take time to make that switch but I’m sure Mo will be successful,” said Kipchoge, who won four global medals over 5,000m on the track including World Championships gold in 2003. “It’s great he will be racing the London Marathon next year because I’m sure that will make the atmosphere even more special.”

Before Farah makes his return to the marathon he will go head-to-head with Callum Hawkins over 13.miles in The Big Half.

Looking back at his 2016 win in London Kipchoge added: “I came so close to breaking the world record in 2016 and it is natural for anyone in that situation to think of what might have been. But that race gave me the confidence to go on and win the Olympic title in Rio and run so well throughout 2017.”

After his second London victory in 2016, Kipchoge went on to win the Olympic marathon in Rio and become the fastest marathoner in history when he ran 2:00:25 in an unratified race in Monza, Italy.

His last 26.2 miles was the Berlin Marathon in September when he again went close to the world record, this time finishing in 2:03:32 – 36 seconds off the mark set by his countryman Dennis Kimetto in Berlin in 2014.

“I feel like I’m in good form,” said Kipchoge. “Berlin was difficult because the weather was not good but my time showed I was in the right shape. As ever with marathon running, everything needs to come right on the day. The competition is always tough in London so I must wait and see how well I train and what the weather will be. I know that I have the world record in me so we will have to wait and see what happens.”