Dewi Griffiths: man of the people 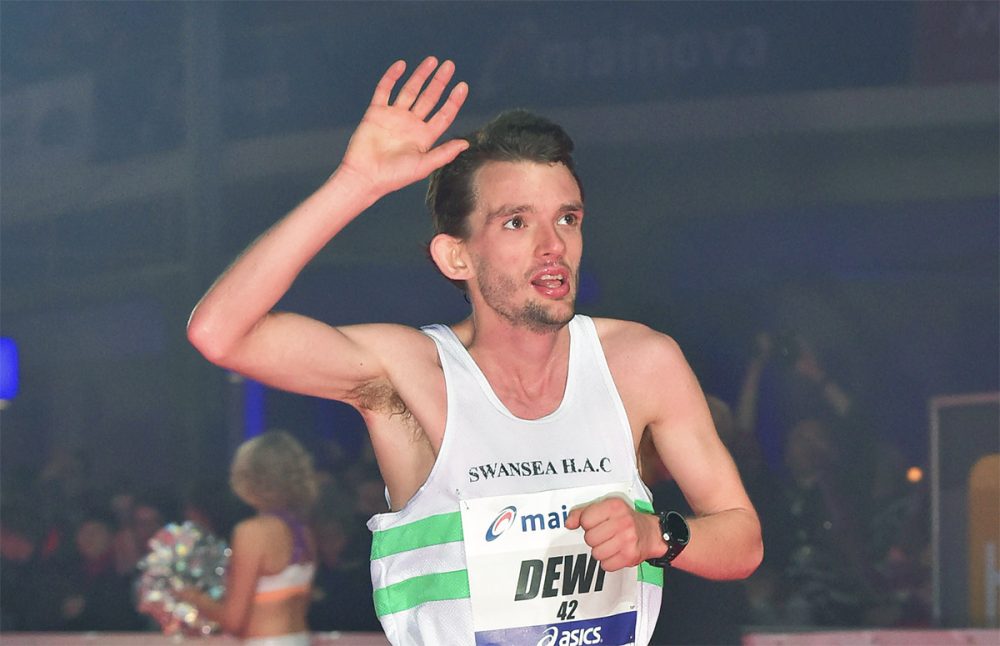 Following the physical exertion of a 2:09 marathon debut few could begrudge Dewi Griffiths an extended break to bask in the media spotlight.

However, Griffiths is not like most, and two weeks on from his heroics in Frankfurt, the man some American commentators have named the “new blue-collar running hero” has returned to what he loves most…racing, competing and just being among fellow runners.

As if a fortnight ago was a distant memory, he’s now in the humble surroundings of Brecon, Wales for the second round of the Gwent Cross Country League. Back down to earth, spikes are on, and there is an eagerness for another cross country season filled with mud and undulating hills.

Needless to say, the Swansea Harriers athlete won on home turf, finishing over a minute clear of his nearest challenger. Aside from his desire to get back racing, it was a trial to see how his “body was responding” after his marathon debut – now looking ahead to the European Cross Country Trials in little under two weeks time.

“I felt fine at the Gwent League and if I felt okay, I was always planning to have a quick turnaround after the marathon. I am feeling good and keen to get back racing so why not, I’ve nothing to lose competing at the Trials on the 25th [November],” says the 2:09:49 marathoner.

“I’m looking forward to Liverpool, it’s always the hardest domestic cross country on the calendar and this year will be no different. Sam Stabler’s in good shape after winning the Cardiff Cross Challenge and the Leeds Abbey Dash. It’s good to see [Andy] Vernon back racing too, I wasn’t expecting him back until after Christmas.

“If you then throw in the likes of Andy Butchart, who’s probably going to be racing, Ben Connor, and Callum [Hawkins] might turn up as well. It’s looking like a hell of a race this year again,” adds the man who clearly loves nothing more than competing against his peers.

When Griffiths last spoke to Fast Running, little over six weeks out from Frankfurt, he was about to embark on a further five weekends of consecutive racing, saying at the time: “we will see how I’m feeling at the end and if I’m still standing.”

One thing that is for sure, you will not find that prescribed in any modern training plan ‘six weeks out from the big day, run hard in five races for five consecutive weeks to be in the best shape on the marathon start line.’

During that five weeks, it was his performance on October 1st at the Cardiff Half that convinced Griffiths he was ready to make his 26.2 miles debut in Frankfurt. After aggressively racing and under the radar of his African rivals, he finished fourth in 61:33.

“After crossing the line in Cardiff, I knew I had to give Frankfurt a go. That was three or four races on the bounce that went better than I could have anticipated. I told myself ‘I have to do it now.’ If I didn’t I would have ended up regretting it,” he says.

Griffiths went on to deliver one of the best marathon debuts in recent times and is now only behind Steve Jones on the Welsh rankings and number 15 on the UK all-time list.

“I didn’t really go into it with a plan or how I was going to feel after 20 miles and 22 miles, but with the confidence from the Cardiff Half I just went for it,” he explains. “I started with the second group and as the marathon progressed I couldn’t believe how good I felt. I went through the halfway split sub 64 minutes, 25K and 30K still feeling good. At 35K I tried to pick up a bottle up and all of a sudden my whole leg seized up.

“From there on I was fighting cramp in my hamstring, it was more annoying than anything because it just hindered my performance as opposed to being a serious injury. 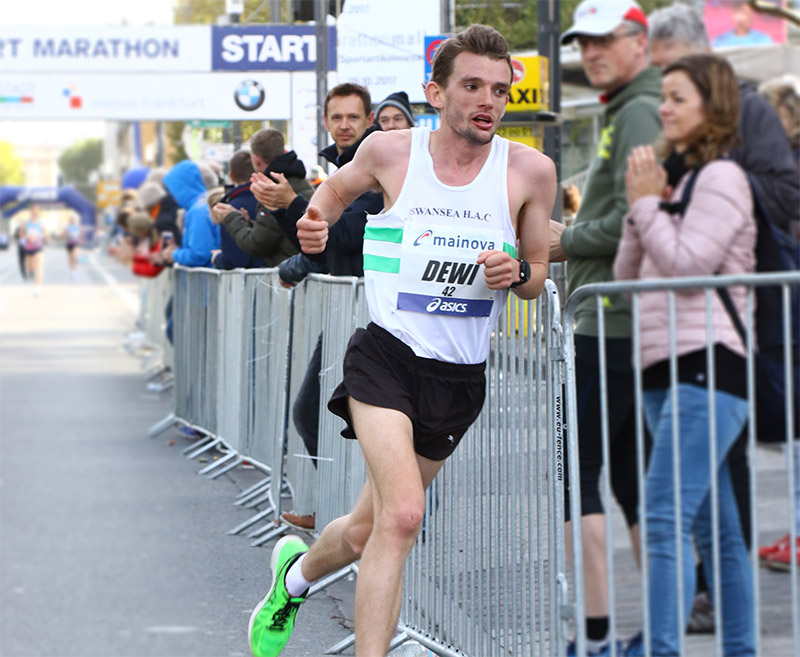 “But I couldn’t have asked for a better debut really and more positively than the actual run, is how well my body has reacted afterwards. The following day and week I was fine. I wasn’t totally exhausted like you hear about, which is really positive for the future. And knowing that I have ran a 2:09 and I can probably go that bit quicker is a good sign too.”

Since his stellar performance in the German city, he has deservingly received mass media attention. “By the evening of the marathon, my phone had just blown up. It went a bit crazy, but all positive. I have enjoyed the response though, it shows that I am doing well and the hard work put in has all been worth it. The best decision I made was to run Frankfurt, none of it would have happened if I decided not to,” Griffiths says.

As well as widespread recognition at home, Griffiths’ achievement reached an audience beyond the shores of Britain and Europe, including the USA, and now has a somewhat huge American fan club.

“It’s been a bit crazy and a bit funny too. I think the letsrun.com message board has had a few funny comments, especially once they found out I lived on a sheep farm,” he says. “There have been a few funny and strange questions in the different interviews I’ve done. I think one was ‘what should you be thinking when running a marathon?’ I just answered ‘I don’t know, I’m not really an expert I have only ran the one.’”

Another comment of admiration on the letsrun.com message board was “if Griffiths was American, the site wouldn’t be able to stand up to the love he’d be getting.”

Laughing, Griffiths says: “I think I read a stat that the last guy to run a sub 2:10 on his debut was Ryan Hall, so I’m in good company. The fact the news has made it to America is a nice compliment to the hard work my coach and myself put in.”

Griffiths previously referred to how his 80’s approach to racing and training has been a big part in his development and like himself, he reckons those targeting a marathon can run a fast time off the back of 10k or half marathon training without making drastic changes.

“It’s essentially what I did. I didn’t really change much, I was running hard every day and my sessions were just the same as I do for 10K and half marathon.

“Just liked we talked about in September, I haven’t really made any big changes this year, it has just been that consistency over a long period of time. It’s that approach to what Jonesy [Steve Jones] used to do back in the day and what I do is very in close to that,” he says.

With his new-found global fame and the bar raised that bit higher – the world is at his feet. In a similar situation, many would take stock of their current set-up with the temptation to make a change here or there, as they reach for that next step in the ladder of progression, but Griffiths is sticking to what has got him this far, the dynamics of longtime coach Kevin Evans, mentor Steve Jones, and just good old-fashioned grit.

“I could, of course, make universal changes, but I think it would be foolish,” he says. “What I have been doing and how I have been training has obviously worked for me, so I am just going to stick to more of the same and hopefully I keep developing.”

As well as positioning himself fifteenth on the UK-all-time list Griffiths moved top of the 2017 rankings ahead of Callum Hawkins’ 2:10:17 best. Hawkins was quick to congratulate Griffiths commenting on Twitter: “Fab run from a top quality guy. Hoping for a battle at some point” – chatter quickly ensued amongst the running community, could we see a Griffiths vs. Hawkins match up at the Commonwealth Games?

However, this talk was quickly muted, with the Welshman sticking to his intent of another crack at the 10,000m. He has “unfinished business” after his 2014 Glasgow Commonwealth Games ended on crutches. Griffiths anticipates marathon number two could be at the European Championships in Berlin, although it “won’t be decided until next year”.

Hawkins is not a rival, in fact, he is a friend, and when asked about influences he has drawn from the UK running scene, Griffiths is quick to point out how his friend’s development encouraged him to dream of feats that might otherwise seem unattainable to British runners.

“Callum has given me huge inspiration with the jumps he’s made in the last couple of years,” Griffiths says of the Scot. “Hopefully I can be that inspiration to the next guy. If I can convince another British or Welsh runner or someone I have raced against, that 2:09 is achievable – I am happy.

“When back racing in Brecon at the weekend, one of those Welsh youngsters might have thought ‘if he can do it, I can do it,’ and that’s what it’s all about…”

Kate O’Connor: senior international and just 16-years-old
Athletes get back to the road for fast Podium 5K