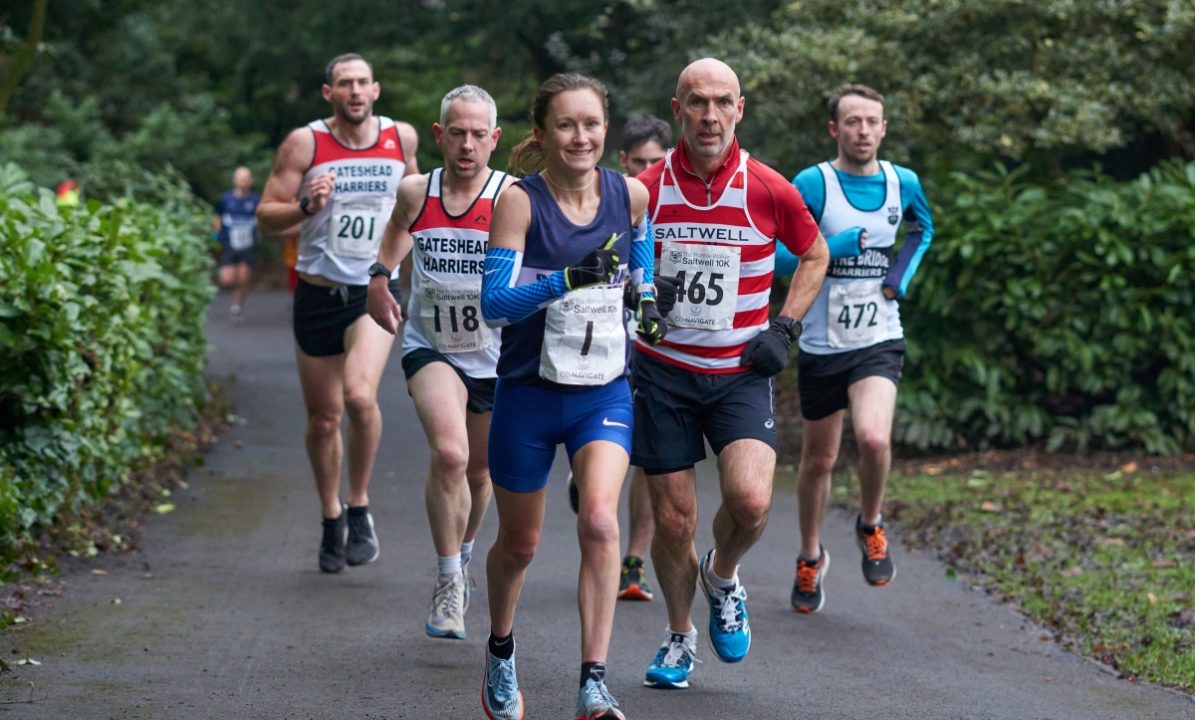 Saltwell 10k sees Aly Dixon and other swift runners out for a last pre-Christmas thrash, Martin Yelling loses his festive record to Matt Bergin and there are pudding dashes aplenty.

Speedy Calum Johnson (Gateshead Harriers) didn’t trouble his sub-30 PB set earlier this year, but he did take first place with a 31:05 at Saltwell 10k on Saturday. The filling to a Gateshead sandwich, Cameron Allen (Houghton Harriers) took second in 32:15 and Conrad Franks (Gateshead) was third in 32:23.

A familiar face was in action for the women’s race – Aly Dixon took premier placing in a comfortable (for her!) time of 36:38. Elswick Harriers looked after the rest of the awards with Amy Fuller second in 38:58 and Judith Nut third in 39:53.

Saltwell 10k – Englands oldest road race!! 🏃🏽‍♀️🏃🏽‍♀️🏃🏽‍♀️ 24 years ago I ran my very first ever 10k at Saltwell. It was when the course ran along Team Valley and up Chowdene Bank. I came 7th in 42.17. 🏃🏽‍♀️🏃🏽‍♀️🏃🏽‍♀️ It took a fair few years before I finally won it but today I’ve recorded my 7th win. I’ll never match the King of Saltwell – Mike McLeod – and his 16 wins but I’m happy to keep on trying even if the hills around Saltwell Park never get any easier!!

At the monthly Tavy 5k 19:07 Amy Yetton ran herself a Christmas No.1 spot, clocking 19:07. That time kept local lady Emma Ryder (Tavistock AC) in second place with 19:20 but it’s unlikely she’ll mind given that it was a 25 second improvement to her PB. Sarah Robinson of the Plymouth Musketeers was third in 22:38.

Chris Rimmer of the Tavistock Run Project took top spot for the men in 16:17. Tavistock AC’s Edward Horn couldn’t quite nudge under the 17 minute mark for second place in 17:04 but kept himself comfortably ahead of James Cutlan (St Austell RC) who placed third in 17:24.

Part two of the South by Five 5k race series took place in Linn Park, Glasgow. The series is a new idea started this year by Ultrarunner Alex Osbourne and is a six race series which will take place across some of the south side’s best loved parks. Kieran Cooper of Glasgow Uni was winner this time around in 18:02, followed by Richard Cooper (Cambuslang) in 19:56 and Crispin Walsh (Giffnock North) in 20:06 – all of whom look to have been taking it pretty steady compared to what they have previously run. Either that or they’ve already had too many mince pies! Laura Wallace was first woman home in 24:02. The next in the series is at Bellahouston Park on 2nd February.

Portsmouth Coastal Waterside Marathon proved to be a winning set up for Peter Concannon in what appears to be his debut Marathon. Peter runs for the who runs for the aptly named Victory AC and completed the out and back course round Langstone Harbour in 2:50:29. Next home was Stuart Nicholas in 2:50:52 and Bournemouth’s ultra marathon man Jez Bragg was third in 2:53:43.

For the women, Southampton’s Jen Granger got her winning spot nicely sewn up as her 3:09:19 was a near two minute lead ahead of her nearest rival and last year’s winner Sarah Hill (Farnham), who finished in 3:11:07. Susan Duncan placed third in 3:18:37.

There were just a couple of Cross Country matches this weekend – we await results from the South of Thames CCA 7.5 Championships and the Thames Valley League match hosted by Reading Road Runners.

Festive feast on the roads

There were plenty of festively themed races this week – some more competitive than others. We don’t have the full results for the Bedford and County AC Christmas Handicap, but we do know that one Martin Yelling of Marathon Talk has now lost his course record to Matt Bergin of FastRunning.com fame! Matt set off last and ran the 2.98 course in 13:46.

The race has a fab sounding se-up where every runner brings a present to the value of £7 and every runner goes away with an award (aka someone else’s present!). We are not sure if official results are published but we note Josh Lunn in the background so suspect there were some impressive times.

@matt_bergs took down the 24-year old Bedford & County AC Xmas handicap record held by @martinyelling with 13:46 this morning. Setting off last, Bergin overhauled those ahead of him to record his rapid run on the 2.98 mile course. @bendy1500 continued his return after injury and looks forward to a good 2020. Happy Xmas from @jlf_rcng – backed by @soar_running @james_lawler_financial and @maurten_official

Elsewhere, the Christmas Pudding Dash is a multi terrain 5 milers held near Hastings. Isaac Elam of Hastings AC finished first in 25:43 for the gents and Rachel Mulvey brought it home for the same team in 30 minutes flat. We await with interest the results (and photos) of the Escot Christmas Marathon which features a Jolly Gin bar and an ‘optional’ water slide!