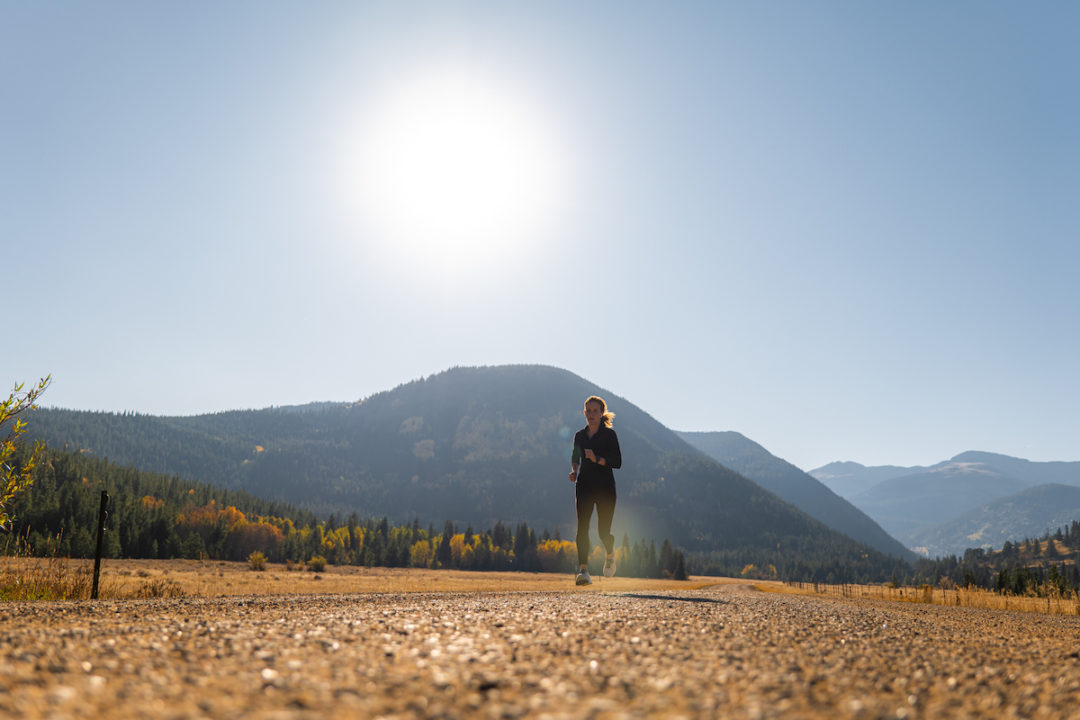 For the next in our series Gill Bland talked to Rosie Edwards who adds the interesting slant of being a UK marathoner based in the US.

Having spent her early years in Llanelli, Rosie Edwards moved from Wales to Indianapolis in 2000 to study for her Masters degree at Butler University.

After graduating she stayed in the US, relocating to Colorado to train. Rosie has lots of experience over the half marathon (PB 74:13) and has represented Wales at the World Half Marathon Championships.

She has already run five full marathons, including finishing in exactly the same time (2:40:49) twice – once in London in 2017 and again in Frankfurt in 2018. Last year she finished 27th in the UK rankings and is one to watch for the future.

For the last two and a half years Rosie has been part of the Nomad Distance Project, a group of 12 athletes who all have different coaches but sync sessions and long runs where they can and travel to races together. Rosie is not running the London Marathon this year because she will be competing in the British Half Marathon Trials in March.

FastRunning: What were you most excited about in your training last year?

Rosie Edwards: Meeting the other athletes in the Nomad Distance Project and forming that group. It opened up so many possibilities and gave me lots of talented women to train with. Also, I am Coached by Robert Hawkins remotely and that is brand new this year which I’m excited about.

RE: I am excited for a new approach to training, travelling home to compete in the British trials for the World Half Marathon Championships in March then potentially targeting a late Autumn or early 2021 Marathon.

My main goals are to dive fully into a new plan and be open to new training concepts while gaining more racing experience. I have struggled with the Marathon in the past years so I didn’t want to jump straight into another without targeting my weaknesses.

I am excited to attack one again after racing some of the shorter distances and taking a new approach, my long term goal is to compete for Wales in the Commonwealth games in 2022 .

FR : What do you think about the women’s marathon scene in GB at the moment? How much do the GB performances get noticed in the US?

RE: I think that British marathoning at the moment is incredible, it’s extremely motivating and gives all of us the belief that success is possible.

Growing up in the UK and seeing the girls I used to race with still competing at the top of their game is exciting. It is very hard to perform consistently at a high level and they have demonstrated that it is possible. There are also a lot of new faces rising to the occasion which is great for the sport. Personally, I’m always aware of the GB scene being from the UK but without a doubt the last couple of years have gained attention from US athletes.

RE: Seeing your peers run well is one of the most powerful training tools, I think Charlie set the stage in April at London leaving us all inspired. I think from that point forward the GB women stepped up their game and knowing it would take a huge run to make the Olympic team.

RE: I think London will be one of the deepest British fields in history, I think it will be the most exciting trials to date and I will be interested to see if it is tactical or whether those able to push the pace will do so to break it up early.

The decision not to pre select any athletes was tough on those who in my opinion had already earned their spots but I strongly believe that they will step up again in April and had prepared for this possibility. It now leaves the race wide open as the British girls can race for three rather than one spot at the trials.

RE: I train in the Adidas Adios and save a new pair for race day. My daily mileage is in the Brooks Launch or Ravenna.

RE: I am supported by Nuun Hydration and I love using their products for hydration and fuelling, training at altitude is harder on the body with regards to hydration so I love their new line, Nuun Endurance which is great for long workouts.