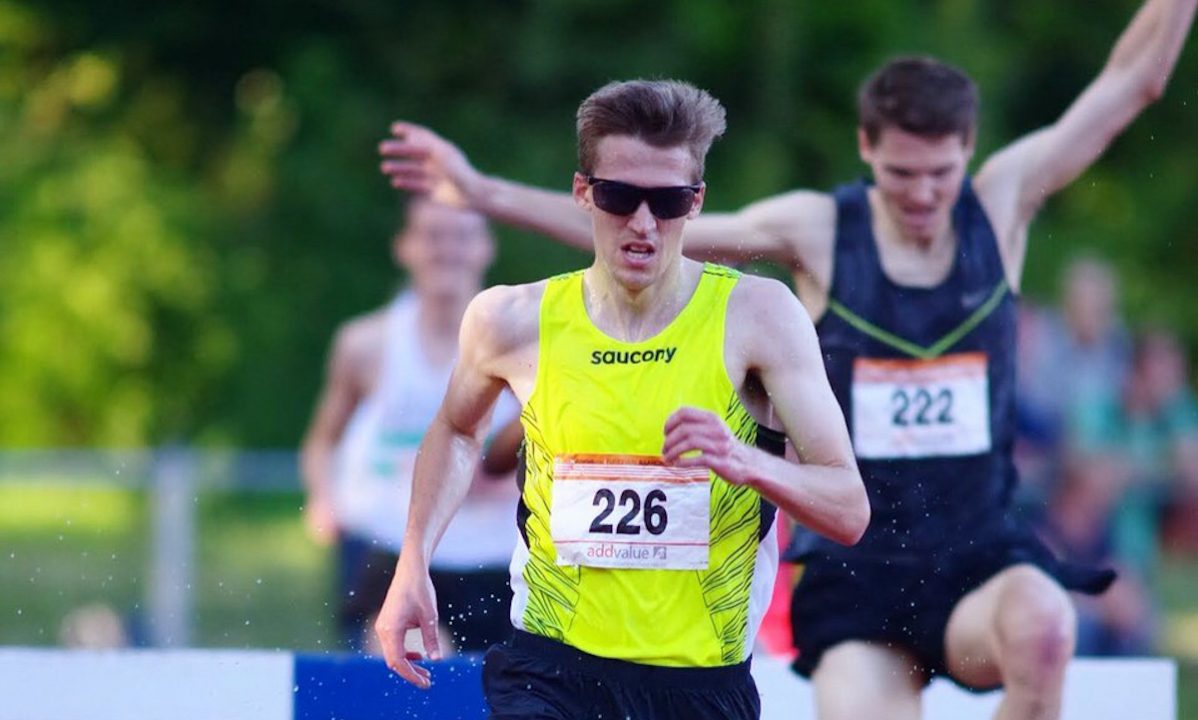 Another week in lockdown saw an increase in the number of ‘virtual races’ taking place. Whether you love them or hate them they at least remind us there is sport out there still. Gill Bland brings us the latest.

66 years ago on the 6th May 1954 Roger Bannister ran the first sub four minute mile at Iffley Road track in Oxford. In honour of that feat and let’s face it, to give us all something to do, the British Milers’ Club (BMC) held the ‘Bannister Virtual Miles’ from Mon-Weds this week.

The race has been fundraising for Turn2us, a national charity that helps people in financial hardship to gain access to welfare benefits, charitable grants and support services – something that is particularly pertinent in the current climate.

Out of the 1954 entrants that the race was capped to, U/23 athlete Piers Copeland came out top for Wimborne AC/ Cardiff Met Uni. Copeland clocked a 4:02 which was a huge PB on the road (4:17 at the Great North City Games in 2019), though he has a 3:56.05 to his name from the IAAF Diamond League Anniversary Games last summer.

Copeland was already showing fine form earlier in the year when he was rewarded with a bronze at the British Indoor Championships in February after he dropped down to 800m at the last minute. You can find a full report on Piers’ fine run from his first coach, Ian Kennedy, here.

66 years ago Bannister ran sub 4 for the mile. This video is a brilliant watch as he explains who good he felt early on and how that changed his perception of pace and effort;https://t.co/paq1DYjO7y

Fellow Cardiff runner Tom Marshall was second with 4:04 (his road PB being a 4:01 at the Westminster mile in 2016). Without perfect chip timing, third place has to be left as a three-way tie with Ben Greenwood (Perth Strathtay), Seb Anthony (West Suffolk) and Cardiff Uni’s James Heneghan (Copeland’s housemate when in Cardiff).

Lily Coward of Invicta East Kent / St. Mary’s Uni ran by far the fastest mile split for the ladies, stopping her watch at 4:38. That was a huge advance on her 5 minute indoor mile time set back in 2017 and on her nearest competitor, Hollie Parker (Enfield and Haringey) who made the split in 4:43. Rachael Franklin (Ribble Valley) was third in 4:45 (she holds a PB of 4:39.4).

World record holder Claire Elms topped the age graded results with a 5:14 for her V55 performance.

Cardiff again to the fore over 5km

Cardiff based athletes were also to the fore in the Welsh Athletics Virtual 5km Challenge. As it stands (the event is ongoing) GB steeplechaser Ieuan Thomas is the man to beat with his impressive 13:53 (without a carbon plate as his social media points out!). Lee Shannon of Pembrokeshire clocked 15:20 which would have been a huge advance on his current PBs. British distance running stalwart James Thie currently sits in third with 15:23.

Under 15 and Welsh Schools XC Champion, Bethan Hardman (Cardiff Archers) is currently the leading woman with 17:43. Amman Valley’s Sioned Howells sits in 2nd with 18:43 with another junior, Rheagan Edwards of Deeside AAC in 3rd with 19:01.

Had a crack at the @welshathletics Virtual 5k today. Just the perfect day for it. Sub 14 and not a carbon plate in sight. As with all virtual racing you take it at face value and hope your GPS watch was accurate. For now, I’ll take it. Time for a beer 🍺 👟 @sauconyuk Fastwitch . . . #WAVirtual5k #virtual5k #virtual5krun #runforgood #athlete #runner #run #workout #instarun #instarunners #runnersofinstagram #running #wewhorun #steeplechase #saucony #ukrunchat #instapic #tracklife #trackandfield #runchat #steeplepeople #5k #virtualrunning #lockdownrunning #runsolo #runalone #timetrial

The Scottish Athletics Virtual Mile Time Trial is also ‘in progress’. As it stands Edinburgh’s Hannah Cameron is the leading woman with 5:01 from Jenny Bannerman (5:03) and a fine run from under 13 Freya Murdoch (5:05). For the men Kane Elliot of Falkirk leads the way with 4:14 ahead of Joe Ewing (4:16) and Ryan Thomson and Alistair Marshall (4:17).

The Sunderland City Runs have also taken their challenge online and we await full results for the 5k, 10k and half marathon distances when racing closes at the end of Sunday . At the time of writing, Greg Walker (1:16:47) and Aly Dixon (1:28:33) were leading the 13.1mile option, with Stephen Jackson (32:48) and Suzanne Thew (42:12) topping the 10k and Emily Rodgers (26:11) leading the women in the 5k alongside Nick Hardy for the men, who is streets ahead of the rest with 15:08 in the 5k. We suspect those leaderboards will see a fair amount of rearranging before the day is out.

This weekend in history, in the ‘real’ world

As we ponder the future of the 2020(21) Olympics and how qualification for those might work, it is interesting to remember that on the 8th May 1984 Moscow pulled out of the LA Olympics, blaming “the commercialisation of the games and a lack of security measures, which amounted to a violation of the Olympic charter”.

Many considered at the time that the lack of Russian athletes devalued the games, due to the loss of their talent in the competition. In the end Cuba and 14 other Eastern Bloc countries joined the boycott and a record 130 countries did not take part, including China.

Romania was the notable exception and did attend the games. In 1980 the USA and more than 60 other countries had boycotted the Moscow Olympics in protest at the Soviet invasion of Afghanistan (source: BBCSport).

In other news this week, Boston’s Mayor announced that parades and festivals will be cancelled up to at least the 7th September. That’s 7 days before the planned rescheduled date for the Boston Marathon. That announcement comes after Hugh Brasher refused to rule out the possibility of London Marathon being elite-only (though he did say that was one of a number of options.