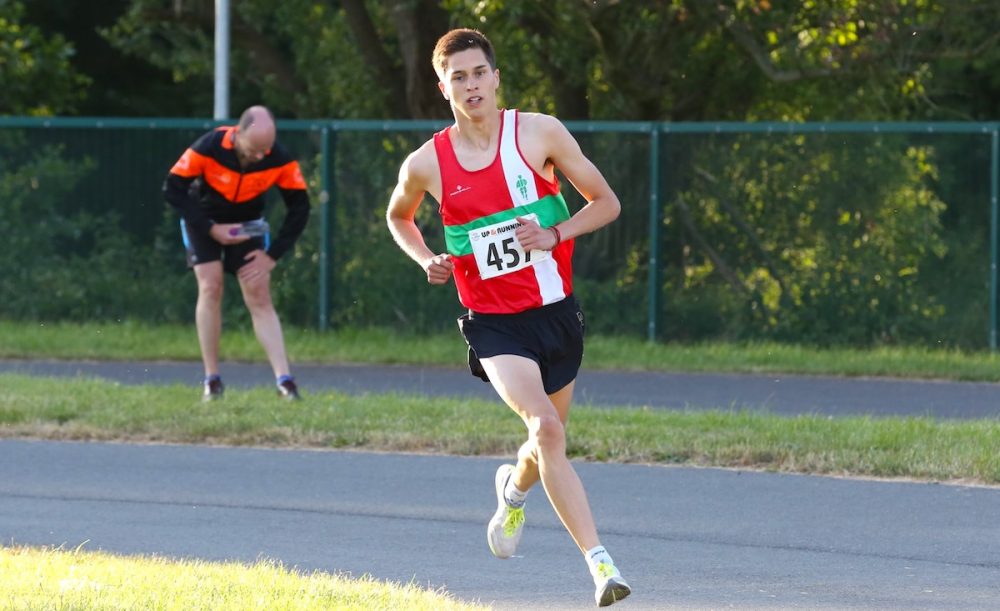 When the Aldershot, Farnham and District runner stormed to a dominant victory at the latest Podium 5k he ran without a watch, breaking the course record in the process.

Former elite duathlete Richard Allen – he is the reigning U23 World Duathlon champion – runs free of all technology when racing, preferring to race ‘naked’.

It clearly did the 22 year-old no harm at all at the increasingly competitive Podium 5k event at Barrowford, as he ran 14:05 to slice 14 seconds off Olympian Tom Lancashire’s previous record in one fell swoop.

Super running once again at the @podium5k last night!

Perhaps due to the fact he’d run a 13:51 personal best at the previous month’s Ipswich 5k (where he was narrowly beaten to victory by one second by Belgrave’s Nick Goolab) he was confident he could “have a go” at the Podium course record.

“I’d only heard about the event a week earlier on Facebook,” Allen tells Fast Running. “I wanted to have a go at the course record, and I really love road racing!”

It was an intriguing sight to see the AFD runner striding out hundreds of metres ahead of his nearest rival, completely unaware of what pace he was running or what his heart rate was, wearing his club vest and shorts and trainers and nothing else.

The contrast between the dominant winner’s attire at Podium and the majority of the field nearly a minute behind was striking, with almost all competitors wearing at least a watch – most of those GPS and HR-monitor enabled – and some also wearing compression socks or arm warmers, technology claiming to encourage more efficient blood flow during exercise.

What does Allen have to say about running ‘tech’?

“I’ve never raced with a watch and I don’t think that will ever change,” he explains. “I understand people like to know their splits and I like to do that in training, but to me racing is an opportunity to forget about all that and enjoy the experience – your watch won’t make you run any faster!

“I do have a GPS watch along with a basic watch without the technology that I like to use for my easy runs.”

Allen’s refreshing attitude to running ‘tech’ in a world increasingly swamped by sports technology companies claiming to help runners of all abilities improve their speed and stamina with the help of the latest GPS watch, compression gear or head visor stands out.

His impressive successes as a GB U23 and senior duathlete may have had an effect on his approach to race technology, though, as it’s notable that many top athletes in duathlon and triathlon race watch-free.

Running improvements since hanging up his duathlon suit

Since Allen gave up triathlon training at the end of 2017, he has sliced more than 90 seconds off his 10,000m PB (he ran 28:54.95 at this year’s Highgate Harriers Night of the PBs) and has also made significant inroads into his 10k road best. However, it is likely that his years of training on the bike and in the pool alongside running have given him a supercharged engine to race with – and he still cycles and swims, just not in competition.

He acknowledges that, along with the obvious benefits of multiple discipline training have had on his fitness, the fact that he can now concentrate more on his running has paid dividends in his race performances this year.

“I had to make a decision between duathlons or running and decided to focus on running, which I think has helped, as well as a progression in my training volume,” he adds.

“I didn’t run that much growing up because the triathlon focus meant I was sometimes more interested in swimming than running, or I was too tired from the bike to run the volume that I wanted.”

That’s all changed now, and, as a consequence, he is achieving the times he is well capable of, and he’s still only 22.

One of Allen’s more well-publicised performances this year was his second place at the London 10,000 road race in May, where he finished runner-up to multi-Olympic gold-winning track legend, Mo Farah. The two athletes ran alongside each other for much of the race, with Farah encouraging the young AFD star to keep in line with him as they wound through the streets of the capital, well ahead of big GB names including Callum Hawkins.

The experience clearly had an impact on Allen: “London was wild! The main reason I competed there was to win the team event for AFD, I didn’t have any expectations individually. It was really inspiring to run alongside Mo, and then to share a podium with him as well! I think it’s one of those memories that you will always have in the back of your mind.”

Memorable performances as he rose through the ranks

Although it is only this year that Allen has really shone under the national athletics spotlight, he has an impressive pedigree of English Schools results, two of which stand out for the 2018 English 5k champion, along with the first time he broke 30 minutes for 10k back in 2016.

He reveals: “Winning two bronze medals at the English Schools as a top year Inter and then as a senior for 3000m were big highlights for me. I enjoyed the whole experience not just the race, as it was the first time I felt like an elite athlete. It meant a lot to me, although I did find it challenging once I had outgrown the English Schools.

“Breaking 30 minutes for 10k for the first time at Ribble Valley in 2016 was unexpected, but I remember how much confidence I took from it. I’d never enjoyed cross country, so I felt like I had discovered road racing, which was exciting.”

Fittingly, his victory at the Mid-Cheshire 5k – which doubled as the England 5k championships – is a big feather in his increasingly brimming hat, a win which he admits “was a surprise to win”.

“It was even better to share the podium with my training partner, Emile Cairess, (Leeds City’s 13:54 5000m athlete)” he adds. Allen’s racing aims for the rest of 2018

The Huddersfield-based athlete is clearly capable of attacking the European Championships 5000m qualifying time of 13:42, but he remains refreshingly grounded about his aims for this year.

“I am planning to compete in the 5000m at the British Championships, but I have no expectations to run the European qualifying time this season – I’m still only 22, I just want to continue improving and enjoy learning,” he says. “However, it would be nice to run PBs for both the 5000m and 3000m by the end of the season!”

Allen spent two years at the University of Leeds, where he was based for his triathlon and duathlon training, but left last Christmas when he decided to concentrate on running instead.

He is now set to start a degree in psychology at Royal Holloway in September, and explains: “It’s hard to make the right choice as a 19-20 year-old, because you don’t really know what you want to do. I have always taken an interest in psychology and I like to balance training with something else, so I’m really looking forward to it!”

It certainly sounds like Allen has got the right attitude to balancing training with the rest of life’s demands.

He runs between 60-65 miles a week – much of that with Phil Townsend’s endurance group at Leeds City AC – alongside swimming and cycling, and does strength and conditioning twice a week, following a programme written for him by Tim Jarrett at Leeds Triathlon Centre.

If his achievements this year since concentrating on running just six months ago are anything to go by, the future is bright for the athlete who likes to ‘run free’, breaking records as he goes.