Commitment not sacrifice key to success for Dan Studley 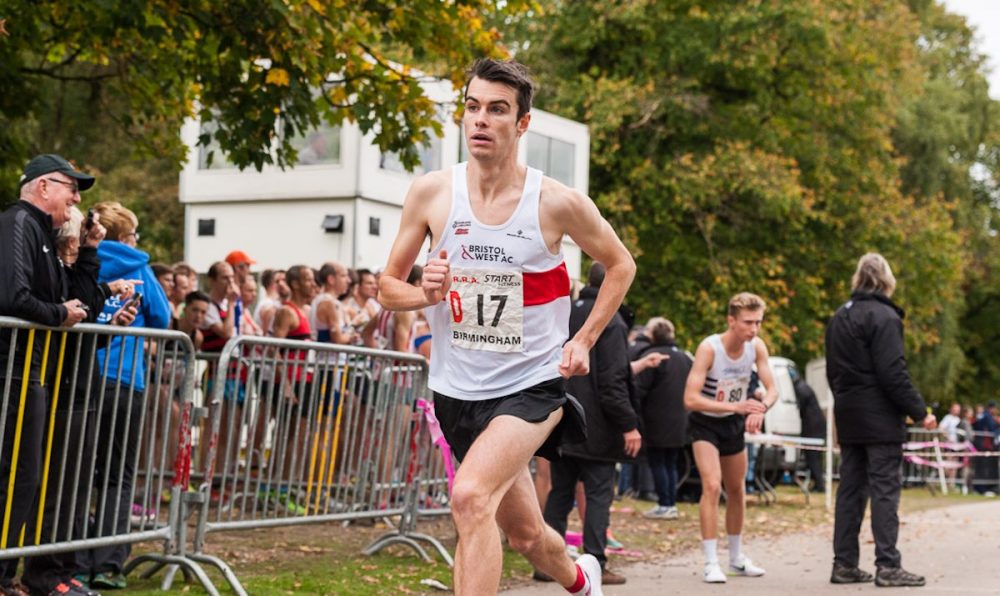 Dan Studley made his GB debut at the 2018 World Half Marathon Championships following an impressive improvement over the 13.1m distance. Here we find out how his healthy attitude to balancing training, competition and outside interests are helping him progress.

Bristol & West’s Dan Studley was a worthy addition to the GB team at last month’s World Half Marathon Championships in Valencia, after slicing more than two minutes off his best for the distance at the preceding Barcelona half, recording a UK top ten ranking time of 64:23.

Although he admits he was disappointed with his 66:20 result in the world championships event, where he finished 103rd, he is hungry for more GB vests.

The 26-year-old has worked hard to achieve a manageable balance with his training, coaching set up and work, along with creating a positive mindset, the combination of which he seems confident will allow him the best chance of achieving another call-up.

The 2015 English National 10k champion, who boasts a 14:02 5k road PB from the Armagh International from the same year, has competed at a club and county level from a young age, alongside playing cricket at a regional level until he was 19.

He is keen to return to cricket once his running days are over, with a view to playing at a high level once again.

Studley took time out from his busy training and work schedule to talk to Fast Running about his experiences running for Great Britain in the world’s most competitive half marathon, the important part his club has played in his achievements so far, along with working with future elite athletes at Loughborough College, his coaches’ influences on him throughout his career, and his future goals.

The World Half Marathon Championships

The day before the global 13.1-mile showpiece, Studley tweeted:  “This weekend eight years ago I finished 273rd at my last English Schools Championships. Tomorrow I make my British debut at the World HM Champs. Never ever stop committing.”

His comment a testament to the years of hard work and drive it took for the Bristol-born runner to achieve this illustrious goal.

“It’s a strange feeling spending such a large proportion of your life focussed on achieving a goal, and then suddenly in the blink of an eye it’s done,” says Studley reflecting on his run in Valencia. “Although the race itself was a bit of a disappointment, I’d felt good through 15k and was on for around 65 minutes, which would have been a solid run in the blustery conditions.

“However, my body wasn’t playing ball in the last few miles, and on the world stage you just get eaten up if you’re slightly off your game.

“It was still an incredible experience to be part of my first GB senior team, and has only made me hungry to make my next team.” 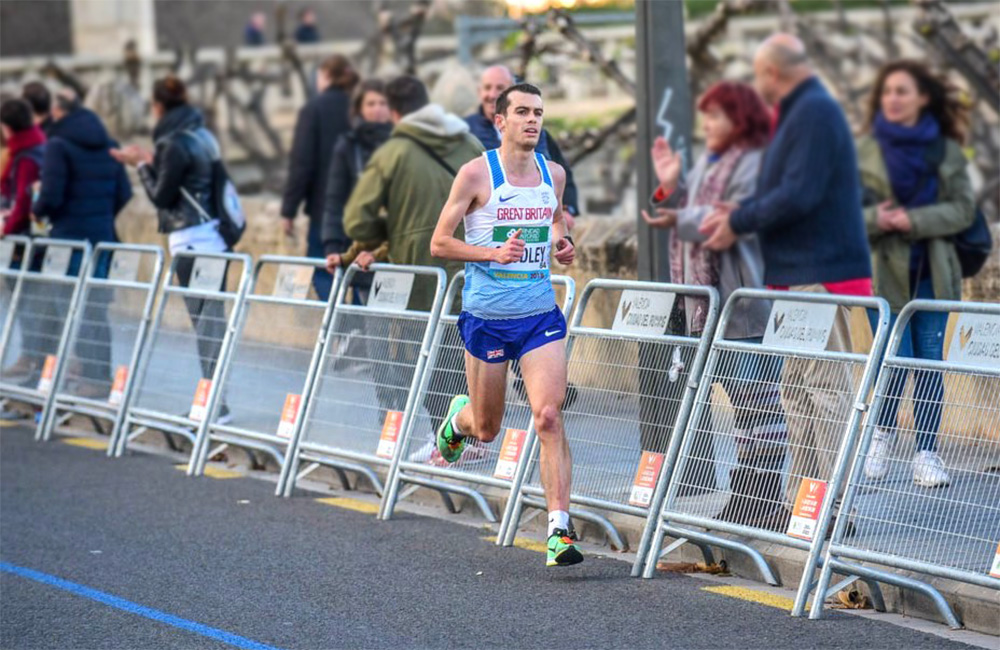 Studley is clear in his mind that to achieve what he wants in athletics he has to have the right approach to the training. Nothing is a sacrifice if the end goal is a positive one.

“I’m committed to my goals, so I hate the word sacrifice,” he explains. “If you view something as a sacrifice it’s the wrong mindset – you have to enjoy the process, otherwise you won’t fulfil your potential.

“My commitment stems from wanting to get the most out of myself in the sport. The beauty of training is there is nowhere to hide – eventually, through years of consistency, everybody has the opportunity to be a great athlete. I like the idea that one day you will know you have reached your potential. I’m definitely not there yet, but one day it will just click.”

The Bristol City football fan juggles high mileage training with a job he loves, working with national standard teenage athletes from a variety of sports.

He emphasises how his hours and his passion for his work allows him to enjoy both his training and his career without either imposing on the other. If anything, they complement each other perfectly.

“I don’t receive anything in the way of sponsorship or funding, so I fund my career from part-time work,” he explains. “For the last three years, I’ve been working on the elite sport apprenticeship programmes at Loughborough College, which provides under 18 national standard athletes with the tools to help them become professionals.

“We use modules such as media, finance, career planning and anti-doping awareness to help them on their way. Because my role is predominately for elite athletes, I’m able to be flexible with my hours (about 20 per week) around training.

“This allows me to continue to progress in my sport and thus share my own experiences and expertise with the athletes on the programme.”

The importance of Bristol & West on his enjoyment of the sports

Studley is Bristol born and bred, and the city and it’s biggest athletics club have clearly played a huge part in his evolution into an international endurance runner.

“I am so proud to be a Bristolian, and running for Bristol & West is one of the most enjoyable parts of the sport for me,” he enthuses. “The city has a great tradition for running, with the likes of Nick Rose and Ian Gillespie competing and training here.

“I am a massive Bristol City fan (I watch them home and away as much as I can), so putting Bristol on the national stage in another sport is really important to me.

“We have an amazing support network, with team managers Mike Down, Keith Brackstone, Chris Elson and Roger Brokersley working tirelessly to ensure we are putting out competitive teams at relays and championships alike.

“As we keep being reminded, the club won the race in 1980, so to be compared to this legendary team would be a big honour for us.”

Coaching set up old and new

He says it’s been a great learning experience with the man who coached Royal Sutton Coldfield’s Laura Whittle to the Rio Olympics, and now also coaches Lewis Moses, who ran a 7:55 indoor 3km this winter.

“We started off by canning the track season and instead built an excellent base through the summer, autumn and into the winter months,” he reveals. “We decided to spend a year trying everything and then being in a position where we can set some more specific targets.

“The winter has been about the half marathon, so now the summer will be about making my debut over 10,000m, at the Highgate Harriers Night of the PBs, and hopefully re-writing my PBs over 1500m, 3000m and 5000m. However, ask me in September what my distance is, because I still don’t know!”

Studley is quick to credit his coaches from his younger days too, with Tom Watson and British Athletics’ David Harmer playing key roles in his progression from the age of 15.

“Tom coached me for seven years until I was 22, and I credit the reason I am still running today to him,” he says. “I went through years of under-performing through this period, which eventually we learnt to be chronic anaemia.

“Once this was sorted, when I was 19, I went from 4:19 to 3:54 to 3:43 for 1500m in the space of four years. I was lucky through my time at Westbury Harriers and then Bristol & West to be surrounded by so many successful runners in the age groups, which always made me believe I could achieve at the highest level.

“Then, when I moved up to Loughborough, I joined up with David Harmer, an assistant endurance coach at British Athletics. I learnt an awful lot through the couple of years with David, and won the English 10k title (at the 2015 Leeds 10k), as well as earning an England cross country vest.”

Although the talented club stalwart cites his English 10k victory as one of his most proud achievements, it is the British University Championships 1500m final from 2014 that he holds highest in his list of favourite competitions.

Studley reminisces: “It was three races in three days to make the 1500m final, and I was about 8th ranked in the final with my 3:45 PB. It was a huge testament to my coach back then, (Tom Watson), for preparing me aerobically for the rounds.

“I took second place (only beaten by a 3:37 Frenchman on his Erasmus year) to win my first ever national medal. I was lucky to receive a sports scholarship at Oxford Brookes University for my second and third years, so it was great to show some reward for their support.

“I actually got a week extension to finish my final degree assignments because of BUCS, and took a big pile of books to the hotel for the weekend, but was too nervous to do any work.

“I then drove straight from Bedford to the uni library and stayed up until 3am to get my degree just in time for the Monday night deadline we had agreed. Pushing the student/athlete boundaries a little far!”

Studley is clearly an expert at juggling his various commitments, as his recent achievements on the international stage have shown.

He summarises how he has managed to balance his running, work and outside interests with an impressively relaxed attitude: “My biggest strength is to keep striving to be as patient and consistent as possible – I feel my diet and lifestyle is great, and I have a nice balance of different things going on, like watching other sports and part-time work to keep things fresh.

“I’ve learnt these non-running activities are as important as the training itself to have a mental stimulus away from the sport – even if Bristol City lose most weeks!”