On through the storm 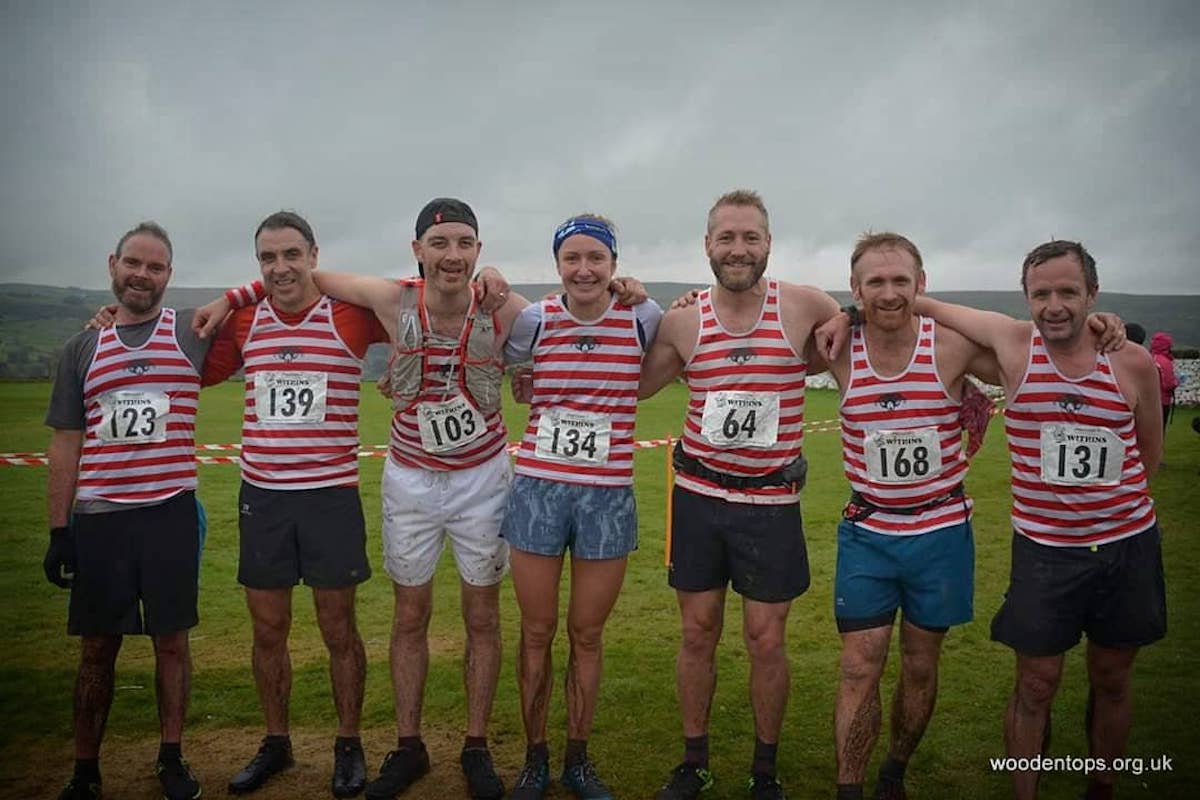 In her latest Fast10 blog we once again wonder if Holly Page will make it to the end of the article, but content in the knowledge that the hardy Yorkshire lass did survive.

October brought with it the Sky Pirineu race, my final event of the Skyrunner World Series before the Grand Final in Italy a few weeks later.  It was my last opportunity to score points in the series and I was finally feeling quite fit. I’d been to the area a few years previously when I’d cycled over to the Pyrenees on a whim from the Alps, but this time I took the lazy option of using transport with more than two wheels.

The Catalans always provide a splendid welcome and I very much enjoyed eating crema catalana until my heart’s content. My performance in the race itself was a little disappointing; I was in second place throughout the climb but pulled away from third towards the top.

For some reason I presumed I would catch the leader at some point on the downhill, but I never saw her, so contented myself with a second place. It was only when I crossed the finish line and found out that she was just 90 seconds ahead that I realised I should have been pushing harder from the start and never let her get away.

I normally finish races feeling like I’ve really given everything I have, but on this occasion I think I could perhaps have made up that deficit at some point on the four hour course. Back in the UK, I packed my belongings and made plans for the upcoming months; Italy, Nepal, Oman, Patagonia… not an easy jaunt to pack for with kit for high altitude glaciated peaks and desert all to fit into one rucksack.

Despite a torrential downpour and a stinking cold, in the knowledge that I wouldn’t be doing any more fell races in 2019, I cycled over the hills to Haworth for a local fell race. Given I had the final of the skyrunning series the next week I ran very conservatively, taking no risks and really enjoying the race. It was however rather tricky to cycle back with the ridiculous prize haul – you can’t beat a good fell race for keeping the wine, beer and chocolate stash topped up.

The next morning I set off for a run, but a couple of minutes in had to stop and loosen my shoe lace as it felt like there was a lot of pressure across the top of my foot. Shoe loosened, there was no change. I walked back home with a sinking feeling in my stomach. The foot felt exactly the same as when I had fractured it back in March. I knew something was wrong, and leaving for my big trip in 3 days meant I didn’t have much time to find out what.

After a lot of shenanigans with the local doctor’s surgery, I managed to get a referral letter to go and get a scan done privately; I needed to know for sure if it was fractured or whether I was just imagining things. The day before leaving for Italy I got the scan done and after more shenanigans about getting the results, I had my suspicions confirmed – the foot wasn’t fully fractured, but “prolonged weight bearing activity” would cause the microfracture to grow.

Quite a shame that all my plans for the foreseeable future involved prolonged weight bearing activity.

It never crossed my mind to cancel my plans. What was I going to do stuck in the UK, go aquajogging and hop around in a moonboot? That didn’t really appeal so I decided to go ahead with my itinerary and just take each part as it came.

One perk of being on crutches at an airport is getting priority treatment; my crutching skills became top notch and although it was difficult, I accepted having to watch the Skyrunning Final from the sidelines rather than competing. I might not have won the race but I did my utmost to win on the dancefloor at the afterparty with my exceptional hopping skills.

The next day I squeezed my sorry self and bags into a tiny Fiat 500 with some British journalists and headed back to Milan for my onward journey to Nepal for the Final of the Golden Trail Series.

Although I couldn’t join in any of the running, I had a great week with my trail running friends from around the world. Just like the previous weekend in Italy, it was hard to see everyone out running in the mountains, but I tried to stay positive, enjoy some downtime and the day of the race I hired a mountain bike and went on a circuitous route round to the finish line so that at least I felt I’d had my own “day out”.

Once the main group left Nepal, my plan had been to hike the Dhaulagiri circuit trek, one of Nepal’s “wild” treks where you have to carry all your food and equipment for at least a week as there are no tea houses to stay in (unlike most of the other well-known treks). I knew that it was too risky to attempt such a committing route, so, having enjoyed my mountain biking experience, it was decided that a good “non-weight bearing” alternative could be to mountain bike the Annapurna circuit instead.

I can count on one hand the number of times I’ve been properly mountain biking (as opposed to inadvertently off roading with my road bike). But my friend Tom and I rented some bikes of questionable quality, got some trekking permits, negotiated the bikes onto a few buses, and got our way to the start of the Annapurna circuit. Because it had taken all day to sort everything, we started out in the dark. I quickly learnt that the mountain bike would indeed go over rocks and I didn’t need to keep putting my feet down in fear on the downhills.

We’d managed to acquire one pair of XL Chinese cycling shorts, but Tom soon realised that a pair of running shorts would not be sufficient protection for his derriere, so after declining the man in the shop’s suggestion of cutting up his own carpet and sewing it into Tom’s shorts, he purchased six nappies and enjoyed not entirely comfortable days of riding along with occasional “nappy slippage” as they fell out into the dust.

The route was tough but beautiful, we climbed from the hot tropical rainforest up into the high snowy Himalayan peaks, temperatures plummeting and oxygen becoming increasingly scarce as we worked our way up to the Thorong-La pass at 5,400m. This certainly beats aquajogging as a “non-weight bearing activity”.

Each night we stayed in tea houses, small basic rooms and simple food, but incredibly hospitable people who were surprised to see us on bikes, and particularly surprised to see Tom’s nappies drying by the fire in the evening.

We cracked out a very long (and tough!) last day to avoid having to sit on a bumpy bus for hours on end, returning to Pokhara as the sun was setting. My foot seemed to have come out of the biking relatively unscathed, so we decided to risk the Dhaulagiri trek.

It was a quick turnaround; shower, beer, food and packing our things for the trek. 36 hours after setting off on Nepal’s infamously steady public transport and death defyingly unsafe road network, we arrived at the start of the trek.

We thought our bags were heavy but it was humbling to see the ridiculous loads being carried by local people, expertly negotiating the icy paths in just a pair of flip flops. We weren’t particularly lucky with the weather and got caught in a storm on the second day, a tent pole snapped on the third night setting up camp on a glacier, I got a fairly severe bout of diarrohea and ended up having to extricate myself from to the tent multiple times in the night, barefoot on the freezing glacier digging little snowholes with my bare hands.

Our wet shoes froze completely so we couldn’t put our swollen feet inside them until we had defrosted them down our jackets, all water sources had frozen so we could only melt snow down our tops / on the gas stove or on one occasion get some water out of a glacial pool after hacking at it with an ice axe. Despite avalanches crashing around us, at Dhaulagiri Base Camp we were lulled into a false sense of security, spending an afternoon relaxing under pristine blue skies. The next morning we awoke to a howling gale. We spoke to the only Sherpa at the base camp, in charge of a group of Dutch hikers who were having their things carried by porters and mules. He said that the conditions were too dangerous to continue that day and that if the storm didn’t clear the next day he would send for a helicopter evacuation.

We both had insurance for a helicopter rescue but I didn’t feel that the conditions were bad enough to warrant it. Nothing a bit of Yorkshire grit couldn’t handle. So I made a difficult decision to pack up our camp and venture on into the storm. Tom had been feeling weak with the cold and the altitude but I told him that as long as we kept moving and eating we would be able to brave whatever the weather gods threw at us.

And throw at us they did. We endured snow, gale-force winds, freezing temperatures as we spent 80% of the day exposed above 5,000m. But eventually we pulled through the other side and after 10+ hours we finally started to lose some elevation and the weather calmed down. We had planned to camp somewhere en route but in the end cracked out a 13 hour day and got all the way down to the valley floor – a return to “civilisation” involving hitch hiking with a party bus full of youths who’d come from Kathmandu.

What an experience it was. Importantly, the foot seems to have come out of it relatively unscathed so I can hopefully join the Manaslu Mountain Trail Race in the coming days… even if I will only be hiking it!

More tales from Nepal, or any of her adventures, can be found on Holly’s Instagram page here.

The Power of 10 for Finlay Wild
Fartlek – the ‘inbetween’ session