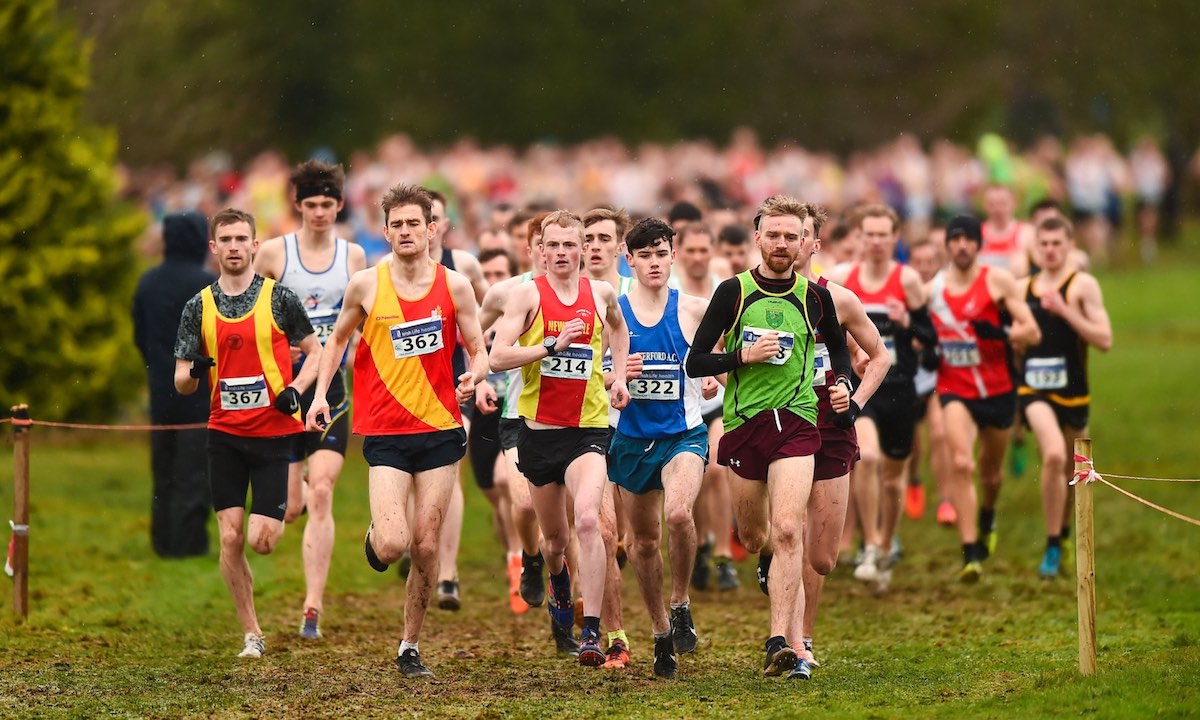 The duo impress in Navan while Mark McKinstry and Catherina McKiernan are also among the weekend’s winners.

Zak Hanna of Newcastle and District AC and Cheryl Nolan of St Abban’s AC were the winners at the National Novice Cross Country Championships held in testing weather conditions at the Navan Adventure Centre on Saturday (December 15).

In a dramatic end to the women’s 4000m race, Nolan took a tumble with the line in sight, but recovered quickly to take a solid victory over Avril Deegan from Ballyroan, Abbeyleix and District AC and Niamh Allen of Crusaders AC. With four in the top 23, Mullingar Harriers won the team title led by Claire Fagan in sixth place. Sligo AC were second and Raheny Shamrock third. Laois took the country team award ahead of Westmeath and Kilkenny.

On the hill twisting course, Hanna, an Irish mountain running international, held off Leinster champion Cormac Dalton from Mullingar Harriers for victory in the men’s 6000m.

In the underage races, Aimee Hayde of Newport AC continued her winning streak in the U17 girls’ race with Adam Ferris St Malachy’s AC taking the boys’ title in the same age group.

There was a Dublin double at U19 level with Jodie McCann of Dublin City Harriers and Efrem Gidey from Clonliffe Harriers comfortable winners in their respective races.

McKinstry’s time of 19:59 saw him finish well clear of the chasers, led by Croad McMeechan of North Down. In third place was Declan Reed of City of Derry Spartans.

First woman in 22:42 was Rachel Gibson of North Down. With Letterkenny’s Nakita Burke second and Ciara Toner of Springwell RC third.

Hiko Tonosa of Dundrum South Dublin made a welcome return to racing when winning the Newmarket Christmas Classic 5km in Co Cork on Sunday (December 16). After a long injury lay-off, the Dublin-based Ethiopian finished in 14:40 – almost half a minute clear of Thomas Hayes from Kilkenny City Harriers who finished in 15:06. Third was James McCarthy of East Cork AC in 15:19.

In the women’s race, Leevale’s Michele Finn, fresh from the European Cross-country a week earlier, finished 16th overall in 16:36. Just four seconds behind for second was Grace Lynch of Iveragh AC, while third was Anna Reddin of Crusaders AC in Dublin. In 17:15.

Clonliffe’s Daniel Stone was the winner of the Drogheda and District Christmas 5km, also on Sunday.

Stone finished in 15:34, with his clubmate Sean Doran second in 15:50 and Simon Ryan of Boyne AC third in 15:56. With third placer David Brady finishing 14th, Clonliffe proved best of the teams; host club Drogheda and District, led by Tadhg Donnelly in fourth place, were second.

First woman was Catherina McKiernan of Annalee AC in 17:20. East Down’s Catherine O’Connor was second in 18:19 and Niamh Devlin of DSD third in 18:21.

In the team competition, Balbriggan and District, led by Ann O’Brien in fourth place, beat Drogheda and District by a single point.

At the Cloyne Commons 4km in Co Cork on Sunday, Brian Harty was a clear winner in 14:30. Ken Ince of Watergrasshill AC and Chris Kelly of Aghada AC were second and third.

Ali O’Connor of Clonmel AC was first woman ahead of Eileen Leahy from Midleton AC and Sonia O’Sullivan of Ballymore Cobh AC.

A day earlier, O’Sullivan and daughter Sophie had defied the torrential rain to run in the Glen River Parkrun. The pair won’t have to worry about the weather at their next assignment – Tuesday’s final NIA Live indoor meet at Abbotstown.

Paddy Hamilton proved the class of the field at Sunday’s Camlough Xmas Lake Run winning in 38:24. Chris Devine and Seamus Fearon were second and third. First woman was Esther Dickson in 45:55, with Nicola Flanagan and Eimear McCracken in the minor placings.

Paul Butcher of North Belfast Harriers and Vicky McVeigh were the winners of the Atlas 5km also on Sunday.

At parkrun events across Ireland, Jarlath McKenna ran 15:54 at the MUSA Cookstown parkrun to record the fastest time across the island of Ireland on Saturday. The quickest woman across Ireland was Raheny Shamrock’s Bláithín Sheil who ran 19:05 at the St Anne’s parkrun.

The fastest Irish parkrun times can be found here.