The Irish round-up is back 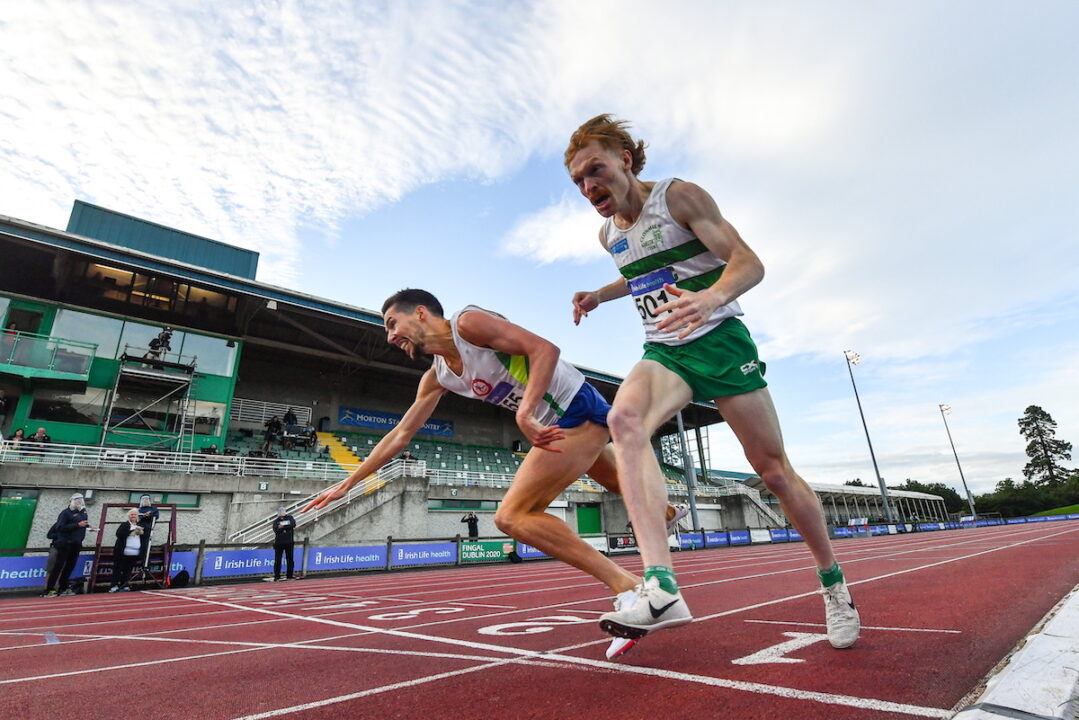 With the major games cancelled and few big names turning out, the opening weekend of the All Ireland Track and Field Championships in spectator-free Santry allowed emerging talent to shine across a range of disciplines.

A record total of over 700 had entered the championships, reflecting perhaps the lack of racing on the roads.

Race of the weekend was the men’s 1500m, where a last -second lunge across the line gave Paul Robinson of St Coca’s AC his first national title in eight years at the expense of his training partner Sean Tobin from Clonmel AC.

On a good day for Limerick club Emerald AC, Amy O’Donoghue ran a smart race to win the women’s 1500m. Holding her fire until the finishing straight, she stormed past Iseult O’Donnell of Raheny Shamrock AC, after both had already passed longtime leader Michelle Finn of Leevale AC. A tiring Finn missed out on a medal when relegated to fourth place by UCD’s Ellie Hartnett.

It was still a fine effort from the Cork athlete who, a day earlier, had won the 5000m in style; plus she’s hot favourite to retain her steeplechase title next Sunday.

Showing a maturity belying his 19 years was Darragh McElhinney of Bandon AC who tucked in behind John Travers of Donore Harriers for much of the men’s 5000m; as indeed did Efrem Gidey of Clonliffe Harriers, another under 23 athlete.

On a day of gusting winds following Storm Ellen, that proved a smart tactic. The three finished in that order, with McElhinney timed at 13 mins 56 secs, Travers at 13:57.11 and Gidey fading on the final two laps but still finishing in a respectable time of 14:17.89.

Abroad, Mark English of Finn Valley AC ran a time of 1:48.42 for 800m on Monday (August 17) at the Trofio Ottavio Missoni in Liguano Sabbiadoro Italy, with Athletics Ireland approval.

Absent from Santry was Ciara Mageean of City of Lisburn AC who was racing over 1500m at the Diamond League round in Stockholm on Sunday (August 23). After two recent Irish records, she finished a disappointing 12th in 4:10.99. Race winner was Scotland’s Laura Muir in a world leading time of 3:57.86.

In the 800m at the Blackheath and Bromley Invitational on Friday last (August 21), Katie Kirk of University of Ulster ran a time of 2:02.98 – just 0.3 off her personal best and her fastest time in six years after a long battle with anorexia.

Over the same distance, Louise Shanahan of Leevale AC and Cambridge University, who is the Irish indoor 1500m champion, ran a personal best of 2:03.17, while in the men’s 800m, Zak Curran of Dundrum South Dublin AC ran 1:50.87.

Nadia Power of Dublin City Harriers, like Mark English, is scheduled to race over 800m at the second round of the All Ireland Championships in Santry next weekend, with heats on Saturday and the finals on Sunday. On Tuesday August 11, Power ran a time of 2:03.13 at the Paavo Nurmi Games in Turku, Finland.

Scheduled for Sunday in Santry are the men’s and women’s steeplechase races, with former champion Tomas Cotter of Dunleer AC entered for the men’s event. Defending champion Jayme Rossiter of Clonliffe Harriers, based in England, won’t defend his title. Rossiter ran a time of 8:22.45 for 3000m at the Blackheath and Bromley meet.

Ballynoe in Co Cork was the venue for the East Cork Road Championships on Thursday (August 20), where Sonia O’Sullivan made a surprise appearance in the women’s 3000m finishing eighth and helping her club Ballymore Cobh AC to team silver behind Midleton AC.
On an evening of gusting winds and cold showers of hail, the race winner was Fiona Santry of East Cork AC in 11 mins 22 secs. Second was Jennifer Goggin-Walsh of Carraig na bhFear AC in 11:56 with Linda O’Sullivan of Watergrasshill AC third in 12:04.

Making it an East Cork double in the men’s 5-mile race in 26 mins 11 secs was Kevin O’Leary of East Cork AC. Two Midleton AC junior athletes, Paul Hartnett and Frank O’Brien, finished second and third in 26:39 and 27:13 respectively. East Cork proved best of the teams on 30 points with Watergrasshill AC second on 45 points and Midleton third on 74 points.

No hill racing at home

Thanks to a change in Government Covid 19 policy, both the 54km Stone Cross to Lug Solo and the Galtee Half Marathon scheduled for Sunday 22 August were postponed, while hill runs at Paddock Hill on Wednesday 19 August and Brockagh on Sunday 23 August were cancelled. Updates at www.imra.ie

Fast 10’s Zak Hanna took part in three races in Italy and the furlough pro ran excellently. A highlight was 8th at the Challenge Stellina 14km, which doubled as the Italian National Champs. That was on the back of a 5th in the Fletta Trail 21km and 3rd in the Piz Tri Vertikal the day before.