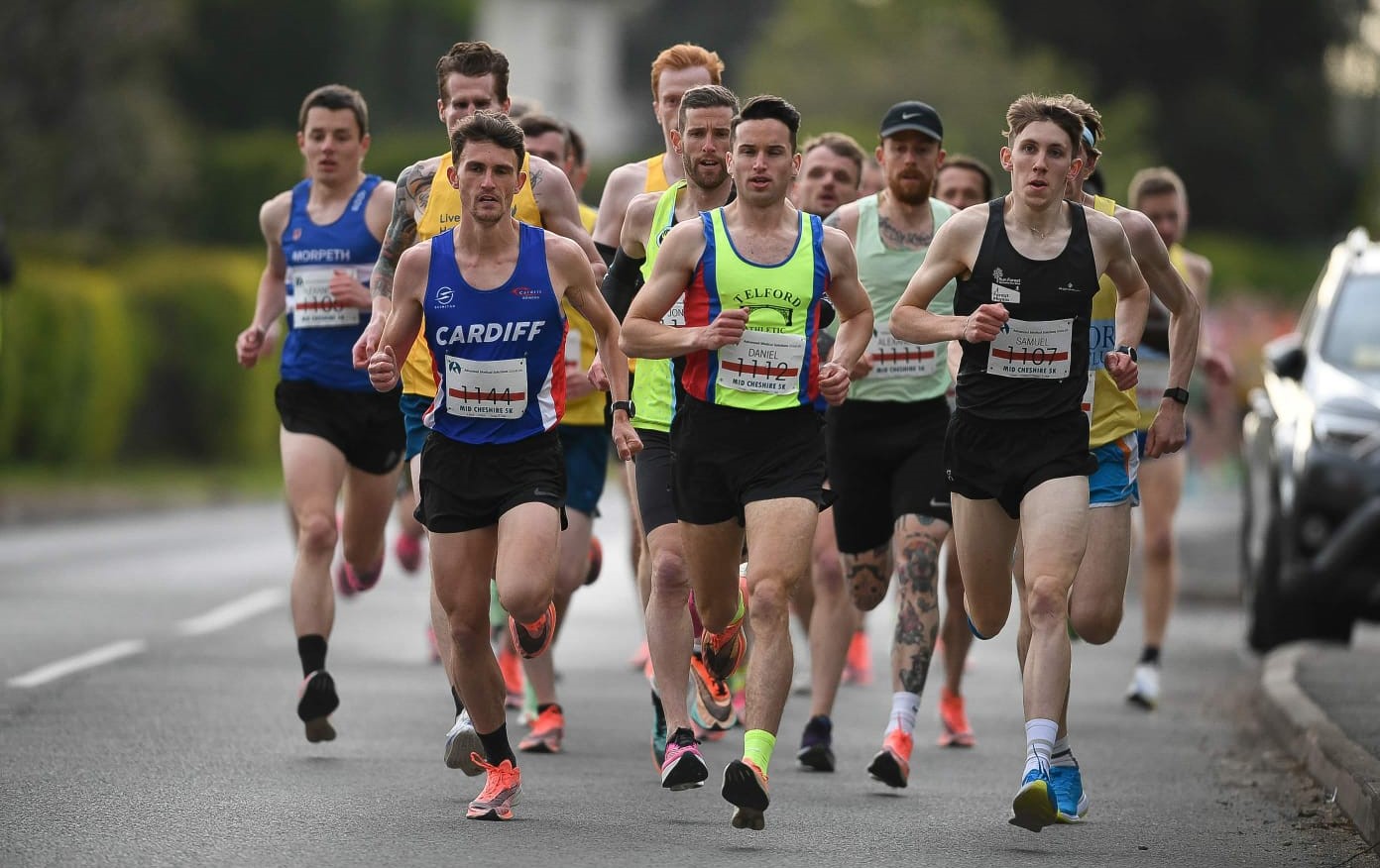 World Record busting road 5ks in Norway, fast 5 and 10ks in the UK and a track season which races on with fierce intent. It’s another jam packed week of running

Watch out, the road times are falling

We start the roundup this week with a result that isn’t in the UK or a UK athlete, but would be remiss not to report it as it gives us a taste of what is to come and adds some useful context to recent performances.

Beth Potter’s seemingly out-of-the-blue World Record beating time at the Podium 5k last month shocked everyone. But perhaps it’s time we started re-assessing our expectations because Karoline Grøvdal from Norway also beat the official WR (14:43, Beatrice Chepkoech) by five seconds this week as she blasted home in 14:39 at the Maarud Gaard street race, organised by the Norwegian sports team Ull/Kis.

A steeplechaser by trade, Grøvdal beat Potter’s time by two seconds and her own track best of 14:51.66. It remains to be seen whether the time will be ratified, but it can’t be long before the record is officially re-written.

No world records but plenty of swift times were clocked, as we travel around this week’s road racing action in the UK.

The Speedway 10k in Chepstow this morning had a top quality field which saw the top eleven men all go under thirty minutes. Omar Ahmed (Birchfield) took home a great win, finishing in 29:18 ahead of triathlete Grant Sheldon (Cambuslang Harriers) who was second in 29:28 and Josh Grace (AFD) third in 29:34. Jenny Nesbitt (Cardiff AC) has had a great run of track performances lately but today it was time to hit the tarmac. She was not happy with the time but she topped the women’s podium in 33:20. Chloe Richardson (Birchfield) ran her first recorded road 10k to finish second in 34:26 and Phillipa Williams (Bristol & West) was third in 35:30.

Not a good day for me. No excuses, onto the next ➡️ https://t.co/sqxg2nwyeX

After the success of the RunCheshire Elite Marathon last weekend the organisers had another busy time of it, as the Mid Cheshire 5k saw a strong field competing in their well attended series.

The women’s race was a brilliant fight to the tape with the top three finishing within three seconds of each other. Mollie Williams of Stockport Harriers broke it in a ten second PB of 16:25, keeping at bay the Vale Royal AC duo of Tessa McCormick (16:26) and Holly Weedall (16:28).

The top two men also had a battle to the finish with Alexander Brown of Morpeth Harriers grabbing the win in a 12 second PB of 14:11 ahead of Jonny Mellor (Liverpool Harriers) in an exciting sprint finish. Mellor was just one second behind him – it’s great to see him back at the racing after his frustrating and rather freak gout-bout meaning he missed out on the GB Marathon Trials and maybe an Olympic team spot. Mellor’s clubmate David Devine had a great race, finishing third in a new best of 14:24.

The Snetterton Race Track 10k and 5k near Norwich saw a comfortable victory over 10k for Highgate‘s Ash Harrell who finished nearly half a minute ahead of his nearest rival in 31:55. It was a weekend of celebration for Harrell who also got engaged to his partner Leisha, congratulations both! Ipswich Jaffa’s Heather Noone was 14th overall and first woman home in 35:38.

In the 5k there was a hometown victory for City of Norwich AC’s Amy Beck in 18:13 and then one mark to the other side of the local derby, thanks to Ipswich Harriers’ James Reeder and a 15:22 finish.

We’re not sure if the Gravesend Floodlit 10k and 5k series would actually need to be lit by now, but that’s what they call it so let’s go with it. Alexander Barber (Swanley & District AC) and Charlotte Wood (Dartford RR) weren’t blinded by the lights, winning their 10ks in 34:04 and 45:18 respectively. There wasn’t a 5k this time.

RunThrough took a more passive approach to visibility as runners took part in Chase The Sun Brixton. That chase resulted in wins for Georgina Turner (38:23) and Dave Edwards (34:54) in the 10k and Margaret King (24:15) and Ryan Willmott (17:06) in the 5k.

At Newbury Racecourse runners tackled the tricky, twisty gravel course over 5km, 10km and half marathon. 2011 u/23 Euro Cross silver medallist Naomi Taschimowitz raced over 5km taking the victory in 16:47. The men’s winner was Ben Cumberland who clocked 15:35.

The 10km saw Thames Hare & Hounds’ Jack Blaiklock cross the line in 32:41 to win with the women’s winner, Amy Killick, running 36:44. Jen Granger of Southampton AC won the half marathon in 79:30 with Ryan Coombs the fastest man running 75:38.

At the Wimbledon Common Half Marathon Dave Edwards was the winner in 78:55 with Felicity Harrison the winning woman in 90:18.

Results from the red rubber ring

Whilst things were more locked down, lots of local clubs stepped up to run track races in waves over short distances so that athletes had a chance to test themselves in a safe arena. It’s great to see this continuing now that more established or larger races are started to happen again.

Kicking off the action on Tuesday this week was Rugby & Northampton’s Moulton Race Night where the home club dominated thanks to Madeleine Jacks (U17) taking the top spot in the women’s times with 11:04.9 and Haydn Arnall (U23) with 8:52.2 for the men.

On Wednesday the Cambridge Local Open Competition covered a range of distances. The 800m proved an exciting one with Angus Harrington (Blackheath & Bromley/Cambridge Uni) and Jeremy Dempsey (Shaftesbury Barnet/Cambridge Uni) tying on time with 1:50.6, though Dempsy got a PB too.

Ellie Loosley (U17 Cambridge & Coleridge) was the fastest woman in 2:25.2 in her race, which had a full field. James Edgerton (Cambridge Uni Hare & Hounds), who was in action in Harrow last week, moved up a distance with success, taking the 5000m win in a PB of 14:38.8 and Phoebe Barker (Tonbridge/Cambridge Uni) was first lady in 17:04.0.

On the same night AFD hosted the Aldershot Open. Matthew Snowdon (Ipswich U23) ran the standout performance, smashing through four minutes for the first time to win the 1500m in a huge PB of 3:49.8. In a mixed race and her first attempt at the distance since 2016, Elena Carey (U23 Bracknell AC/Brunel Uni London) bagged herself the women’s fastest time of 4:35.2 and a new best.

In the 3000m Lilly Coward (Invicta East Kent/St. Mary’s Uni) was also going back to a distance she’d not competed in for some time and came away with top woman in 9:25.3. Jack Boswell (AFD) was first in the men’s race with 8:45.0.

On Thursday night our attention turned to Harrow AC’s Spring Open series where Luca Stubbs (Shaftsbury Barnet U20) went sub-two minutes for the first time in a convincing 800m win. Nicole McGovern (U17 Shaftsbury Barnet) was first lady and 2nd in her mixed race in a PB of 2:14.36.

Update from the States

Slightly further afield, Fresno, California saw a slew of British athletes representing their American colleges in the West Coast Relays on Thursday and Friday. In the 1500m Jonathan Shields (Sheffield & Dearne/Boise State Uni) was 8th overall in 3:44.52, Bedford County’s Matt Leach placed 9th in a PB of 3.44.65 ahead of Tonbridge AC’s Chris Olley who finished moments later in 3:44.66. In the women’s race, Elise Thorner (Wells City/New Mexico Uni/Yeovil) got the 4th spot overall in a PB of 4:20.92.

The 800m was a chance for youngster Keeran Sriskandarajah (Herne Hill Harriers U15) to show his racing mettle, winning in 2:03.30. Youth won out in the women’s field too as Lilah Unwin (Reigate Priory AC U15) was first in a PB of 2:17.48

At the longer end of things

The Country to Capital took the 43 mile route back from Wendover to London, Paddington on Saturday. Zoe Salt only needed 5:52:48 to cover the distance, in a close finish just seven seconds ahead of Miki Neant.

Thomas Beedell had a much more comfortable margin, taking the men’s win in 5:15:00 with no one close for another 13 minutes.

The North Downs Ridge 50k finished in a vineyard which sounds like a recipe for either delight or disaster, I’m not sure which. Paul O’Sullivan was fastest male in 3:40:30 and Samantha Davies fastest female in 4:28:57