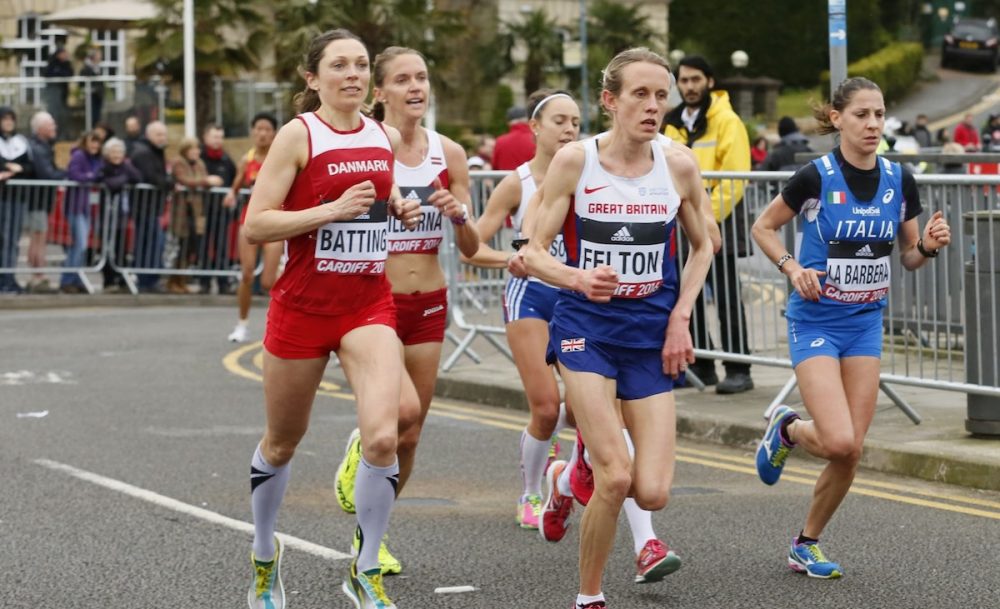 The British international dominates in Cornwall while Alex Pilcher excels in America.

Rachel Felton impressed as she claimed victory at the challenging St Levan 10k in Cornwall on Friday (August 17th).

This notoriously hilly and winding Cornish event always tests even the strongest of runners, and Friday night’s race was no different, with winning times well down on the victors’ overall PBs.

Shaftesbury Barnet’s Felton took the women’s race in 36:28, some two minutes down on her season’s best but still impressive on this course.

Cornwall AC’s Heidi Tregenza’s 36:46 represented another strong performance for this consistent South West athlete, while the commanding V45 former international, Emma Stepto, ran 37:03 to prove she is still a force to be reckoned with, and should certainly not be ruled out for a come back over the marathon distance.

Mounts Bay Harriers’ Peter Le Grice enjoyed a large margin of victory when he took the title in 31:59, although U17 Sam Goodchild from Cornwall AC’s 33:34 was a PB for the youngster in second. Goodchild’s club mate Tom Slattery wasn’t far behind in third with a 33:57 result.

Derby’s Alex Pilcher ran the race of his life to finish third at this all uphill gruelling event in Colarado, which sees competitors starting at the base of Pikes Peak and climbing over 7,815ft  to the top of the 14,115 foot peak.

Start of the Pikes Peak Ascent which unfortunately was shortened, finishing at Barr Camp, due to lightning forecasts later on in the day. 🆙️⛰ #pikespeak #manitou #coloradosprings #pikespeakascent #redlining https://t.co/VmqNTWfcAO pic.twitter.com/WSjJZp7uNt

Pilcher, a sub-70 minute half marathon runner on the flat, ran a superb 79:15 to finish less than three minutes behind the winner in an event that takes in dirt trails, rocks and extreme altitude. Well done Alex!

This fast course in the west central Lowlands of Scotland produced some scorching fast times once again, with the winners of the men’s and women’s races impressing in particular.

Kilbarchan’s Euan Gillham was masterful in victory when he scored the win with a scintillating 30:46, while Shettleston Harriers’ international star, Fionnuala Ross was the first lady across the line in a dominant 34:09. Gillham’s club mate Gemma Rankin was more than two minutes behind Ross but still ran a strong 36:03, while Lothian’s Jo Williams’ 37:15 was another good performance to claim third place.

Shettleston Harriers claimed the second and third prizes in the men’s race too, with Lachlan Oates (31:14) and Dan Bradford (time TBC) making this a top class race all round.

Stockport Harriers’ V40 Kelly Crickmore showed the seniors how it’s done when she won first prize, narrowly missing the course record with a 37:26 time in victory.

Fellow veteran, albeit in the next age group down, Carol Parsons from Ellesmere Port, was never far behind when she earned the second place on the podium with 37:55, while Prestatyn’s Amie Bagnell took third with a 38:26 result.

Newcastle Staffs AC’s Felix McGrath’s 32:30 was good enough to take the men’s race, just 18 seconds ahead of Hebog’s Owen Roberts (32:48), with Cornwall AC’s Colin Snook a long way from home in third with a 33:05 clocking.

Keswick’s Tristan Windley made the trip south from Keswick more than worthwhile when he took the title here in a fine 75:36. The Essex athlete is more used to competing off road on the fells or on the country, but put his undoubted strength to good use at this popular Lancashire event.

Windley was nearly four minutes clear of second placed Chris McCarthy from nearby Lytham St Annes, who crossed the line in 79:33, just 23 seconds ahead of Sunderland’s Craig Gunn, who himself was rewarded with a 79:56 PB.

Also in PB form was the winning lady, Wesham’s V45 ace Helen Lawrenson, whose time in victory was a huge 18 minutes! Lawrenson took the first prize in a superb 81:34 to finish 6th overall. Second placed Sam Edwards from Red Rose can take consolation in the fact that her runner up time of 99:05 was a lifetime best, while the last lady to make the podium, Blackpool, Were & Fylde’s Nicola Unsworth was only 20 seconds behind with a 99:25 result.

The top three women all crossed the line within 78 seconds of each other, with One Track’s Faye Beechener’s 1:34:18 enough to take the win ahead of Stowmarket’s Tamara Jordan’s 1:35:02 and Dulwich Runners’ Chloe Green’s 1:35:36. Jordan is a classy athlete with a PB of 78:53, but has struggled for form in recent years. Let’s hope this sub-3 hour marathon runner is on the way back to the top where she belongs!

Colchester’s V40 Ged McMillan enjoyed a 200 metre margin of victory when he took the men’s race in 79:57, with Cambridge Harriers’ James Macdonald 80:28 representing a valiant attempt to wrestle victory from the older athlete. Marcus Kilsgaard was some way back in third but ran a still strong 82:01 to finish well clear of his nearest rival.

It was close at the top of the men’s race here too, with Sudbury Joggers’ Kieran Hayles putting his club name to shame when he ran faster than anyone else to win in 36:52. Ipswich Jaffa’s Steven Parry ran well to take second in 37:02, a fine result for the V50, while Felixstowe’s Gary Taylor was never far behind in 37:13.

Ware Joggers’ Michael Waddington was half a minute up on second placed Sean Trott when he took the win in 34:21 to Trott’s 34:54. Brackley & District’s Sam Dix’s 35:52 earned him the third place on the podium, but far more impressively a huge near two minute PB!