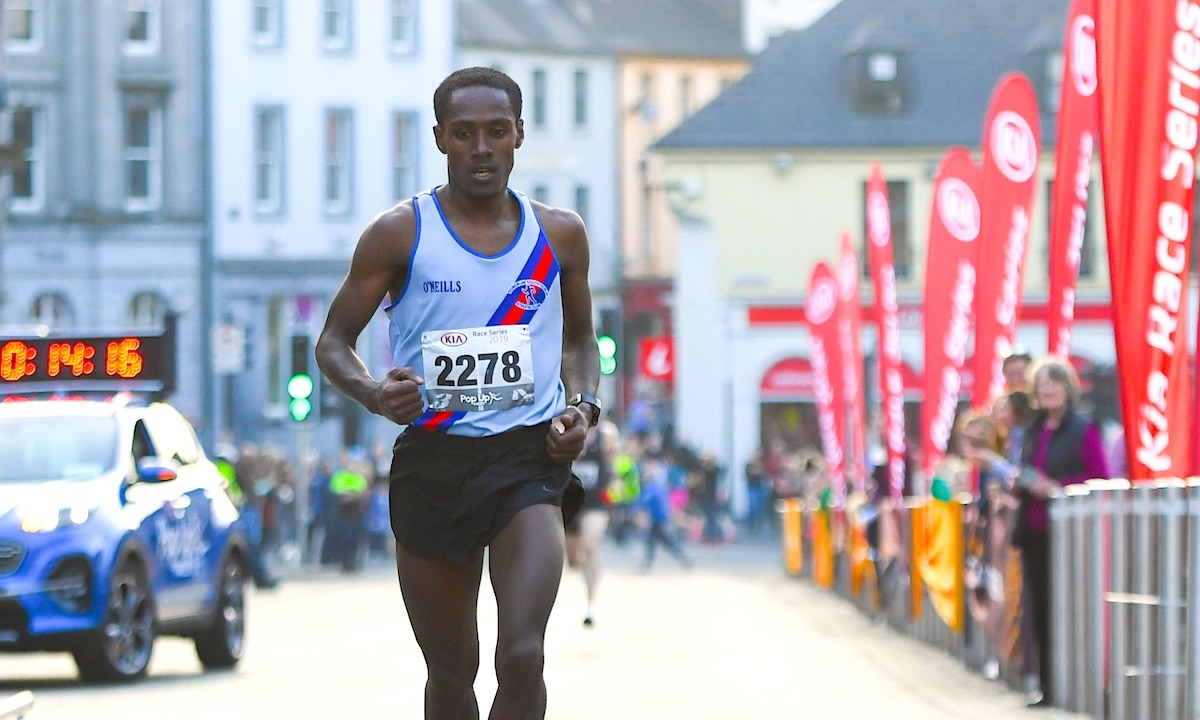 Tonosa and O’Connor win in Kilkenny as road runners also race in Naas, Faugheen and Derry, while Ryan Forsyth and Brian Flanagan impress on the track in the States.

Hiko Tonosa of Dundrum South Dublin followed up his victory in last weekend’s National 10km with victory at the Streets of Kilkenny 5k last Thursday (April 18).

With a course record bonus of €500 on offer, Tonosa, along with Eric Hayes of Donore Harriers and Thomas Hayes of Kilkenny City Harriers pushed the pace from the start.

Only in the closing stages of the race did the Ethiopian-born Tonosa break away to win in a course record time of 14:15. Keogh was just five seconds behind in 14:20, with Hayes third in 14:35.

Even closer was the women’s race with 12 seconds separating the top four. Leevale’s Sinead O’Connor won in 16:47 with Siobhan O’Doherty of Borrisokane AC just one second behind for second. Close to 800 completed the race, which was the second round of the Kia Race Series, which includes a master’s category this year. Finishing first M40 and sixth overall in 15:42 was Paul Fleming of Rathfarnham WSAF AC, with Ian McGrath of Sli Cualann two places behind in 15:47. First W40 was Caroline Donnellan of Edenderry AC in 18:07.

Sean Doran of Clonliffe Harriers was the winner of the Streets of Naas 5k held on Easter Sunday (April 21).

Doran finished in 16:12 with Aindriu Ó Comhraidhe of St Michael’s second in 16:27. Michelle Cox of Newbridge AC was first woman in 19:23.

Winner of the Faugheen 5k, the opening round of the annual Outfield Sports Carrick AC race series, on Friday (April 19) were David Mansfield Clonmel AC in a time of 15:11 and Angela Mc Cann, also Clonmel AC, in 18:15.

Mark McKinstry of North Belfast Harriers was the winners of Bay Road 5k in Derry with a time of 14:49 on Wednesday (April 17). Danny Mooney of Letterkenny AC was second in 15:02 with Eoghan McGinley, also Letterkenny, third in 15:07.

First woman was Rachel Gibson of North Down AC in 17:37. Ciara Toner of Springwell RC was second in 17:44 and Kerry Bamber of Ballymena Runners third in 18:01.

Irish international athlete Ryan Forsyth of Newcastle AC knocked over three seconds off his best when he ran 13:38.01 in an invitational 5000m Stanford Cardinal Classic in Palo Alto, California on Friday (April 19).

Forsyth, a student at the University of Colorado and the current Irish 5000m champion, finished fifth in the race, won by Grant Fisher of Stanford in 13:19.52. Last December, he proved best of the Irish in the U23 men’s race at the European Cross Country Championships in Tilburg, Denmark, when he finished fourth. In Baton Rouge on Saturday (April 20); Brian Flanagan of Clonliffe Harriers won a steeplechase in a personal best time of 9:06.16. This run propels McNeese University’s Flanagan well into the Clonliffe top 10 and also moved him up into third place in the Southland Conference.

“I was very pleased to get a great run in today,” said Flanagan on the McNeese website. “It was a huge boost for me mentally after struggling all fall, even missing the cross-country season due to injury.

“I was taught by an old Irish coach that distance running is 49% what you have in your legs and 51% what’s in your head. This spring, I knew I’d built up the adequate fitness to match and even beat rivals.

“But with this new PR today, it has given me the confidence in myself that my best days are most definitely still in front of me going into the conference meet in two weeks. It’s a great day to be a Cowboy!”

Also on Saturday, Roisin Flanagan ran 2:08.34 for 800m at the Beach International in Long Beach, California.