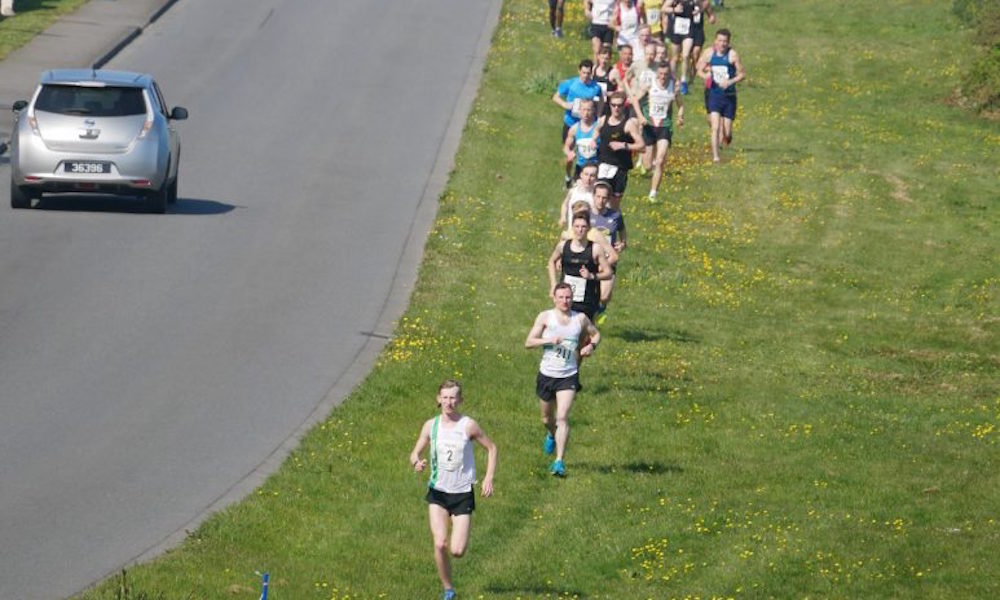 The Easter weekend is always a busy one for island running festivals, with both Guernsey and the Isle of Man hosting hugely popular multi-day events in searingly hot conditions this year.

In the first of two Fast Running weekend round-ups, tonight we look at the Easter race festivals, the Mount Sac relays and the Salford 10k, as well as recapping on the Scottish 10,000m championships and the fastest parkrunners in the UK!

The Guernsey Easter Running Festival kicked off with the traditional 5k road race on the Friday (April 19th), with Joshua Lewis and Sarah Mercier taking the wins in the evening sunshine.

Lewis won by a single second in 15:32 from City of Portsmouth’s Jacob O’Hara, with Victoria Park Harriers’ Will Woodcock a further three seconds behind in a tightly fought race.

Mercier’s time in victory was 16:38, the Guernsey AC ace beating Isabel Morris by some margin, Morris crossing the line in 17:16. Guernsey’s Jenny James was third in 17:34, making it a successful day for the club.

The second woman across the line was Guernsey’s Megan Chapple in 32:03, while club mate Emily Squire was never far behind in 32:30.

Get the full report in tomorrow evening’s bumper Fast Running weekend round up!

Friday’s Isle of Man 10k was a boiling hot affair with a familiar face leading the pack home on Friday (April 19), as Manx Harriers’ Ollie Lockley took the win once again in 30:40.

Well ahead of the rest of the field, he beat off still classy competition in Edinburgh’s Jack Leitch and Cambridge Uni Greyhounds’ James Hoad, who clocked times of 31:01 and 31:14 respectively for second and third.

Manx Harriers were on fire on Friday as the club’s Rachael Franklin took the women’s win in 35:40, nearly a minute ahead of second placed Vicki Cronin of Manchester Uni Alehouse, the spectacularly-named athlete’s club claiming silver with a 36:36 result. Third place went to Edinburgh Uni Hare and Hounds’ Naomi Lang in a time of 37:16.

Saturday saw Keele Uni’s Felix McGrath claim the top spot in the Peel Hill 4m race in 20:34, a mere five seconds ahead of Leitch, who again made the podium in 20:39. Lockley had to console himself with third here in 20:46.

It was business as usual for Franklin as she won again, this time over the 3 mile distance in 16:38, with Lang also a prize winner once more in second with a time of 16:50. Lang’s Edinburgh club mate claimed third in Amy Frankland with a 17:42 clocking.

Incredibly Franklin won Sunday’s Isle of Man Easter 5k road race (April 21) too, speeding to a 17:18 time to take the overall title to boot. Lang was second lady in 17:32 while Cronin revisited the podium in third with a 17:54 result.

Lockley made up for his third place in Saturday’s race by taking the 5k win in 14:44, ahead of David Mullarkey’s 14:52 in a great display of fast running. Third place went to Leitch in 15:05 to round off a great weekend’s racing.

The team and overall standings will be included in the Monday evening round-up so keep your eyes peeled on Fast Running!

Across the pond at the Mt. SAC Relays in California – ‘Where the world’s best athletes compete’ as the event promotions claim – Worcester and Hoka Naz Elite star Alice Wright was fourth in the 5000m, scoring a 15:45.51 PB in the process on Saturday (April 20).

Back in the UK, Cambridge & Coleridge’s Norman Shreeve ran the race of his life to win the Salford 10k on Friday (April 19) in a 31:03 PB in sweltering conditions.

Shreeve held off Border’s James Douglas, who ran 31:26 for second, and third placed Chris Richards from Salford, who clocked 31:28.

Lachlan Oates and Fionnuala Ross retained their titles at the Scottish 10,000m Championships as Shettleston Harriers made the most of the event taking place at their Crownpoint track on Saturday (April 20th). The Harriers reaped the benefits of competing on home turf when they claimed three of the six medals up for grabs at the Glasgow Athletics Association-hosted championships.

Read all about the exciting day’s racing in our full report here.

The UK parkrun top ten was once again topped by Birchfield’s London Marathon-bound Hayley Carruthers and Victoria Park Harriers & Tower Hamlets AC’s Paul Martelletti. Find out who else made the top ten in a competitive day’s running here.