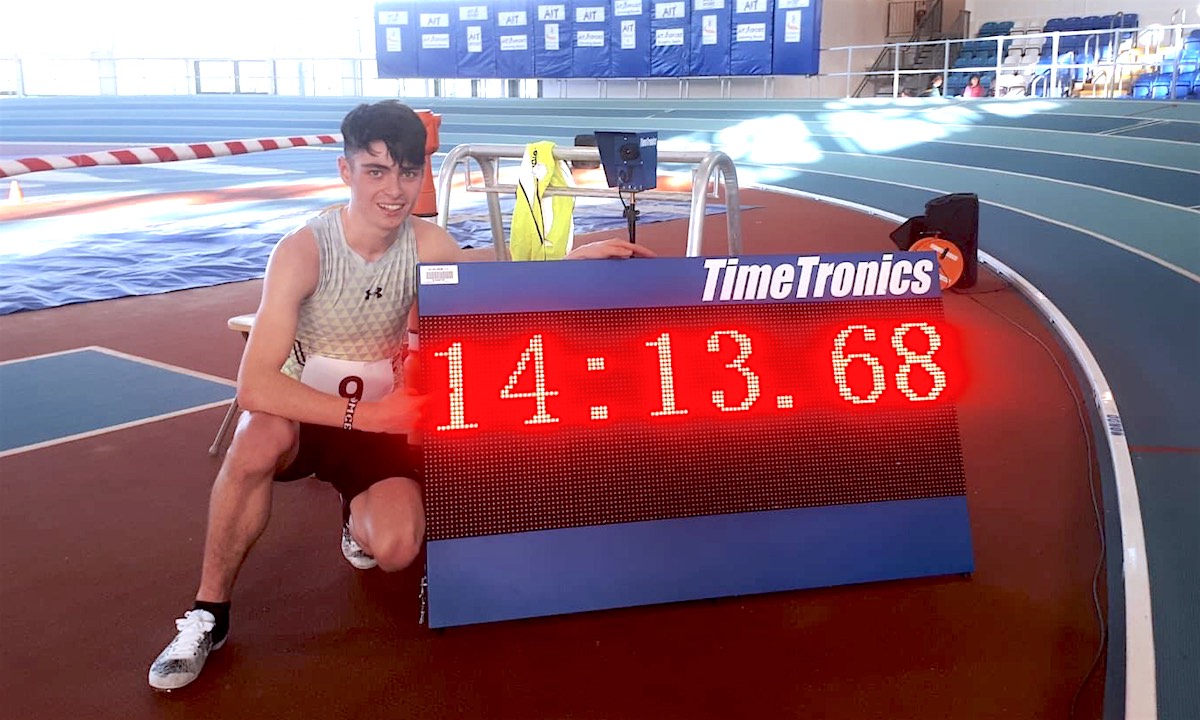 McElhinney’s time smashed the 14:37.02 record set by Aaron Hanlon of Clonliffe Harriers in Boston in December 2014.

At the Dunboyne Throws Meet on Saturday, Sean Mockler’s 66.82m in the hammer was a qualifier for the European U20 Championships.

Finishing second behind the Moycarky Coolcroo AC athlete was Tom Furlong of DMP AC with a personal best 62.47. Winning the men’s discus with 53.32m was Eoin Sheridan of North Westmeath AC.

Mark McKinstry of North Belfast Harriers streaked away from the field to win the men’s title at the Northern Ireland and Ulster Cross Country Championships at Lurgan Park on Saturday. McKinstry’s time of 40:48 saw him finish with over half a minute to spare on the chasers led by Declan Reed of City of Derry Spartans.

City of Derry Spartans, with five finishers in the top 15, were clear winners of the team title on 44 points. North Belfast Harriers with 88 points were second and North Down AC third with 150 points.

Breege Connolly of City of Derry Spartans won the women’s race by a wide margin from Sarah Lavery of Beechmount Harriers and Rachel Gibson of North Down AC. McGann, 72, a member of East Cheshire Harriers, had upped his daily training for the hilly 12km race by running laps of his local park.

He finished a respectable 1990th in the senior race and was delighted not to be lapped by the winner, Southampton’s Mahamed Mahamed.

McGann holds the record for the most consecutive ‘Nationals’. His former club-mate Gareth Raven, at 44 years of age, is the next nearest with 25 senior and two juniors runs.

McGann, a brother of Olympic marathon runner Desi has no intention of retiring. “I’ll not pack up yet,” he said. “There’s another year in me, hopefully.”

Other Irish finishers included John Eves of Dundrum South Dublin AC, who was the second counter for the Bedford and County AC team which finished just out of the medals in fourth place.

In her first ever Business Houses Athletic Association race, Bronagh Kearns won the women’s two-mile race at the AIB Cross Country in NUI Maynooth on Saturday.

Kearns finished in 12:17, with Maura Kearns (no relation) of the Teachers team second and Katie Rogers of Google third. Health Services beat Teachers for the team prize, with Revenue third.

In a competitive men’s four-mile race, Barry Murphy pushed the pace on the early laps with Conor Burke of KPMG in close attendance.

On the final lap, Sean Doran of C&E Products took over in front and finished first in 20:56. Second in 21:04 was Thomas Sherlock of Bank of Ireland with Burke in third place ahead of Murphy.

First of the A grade teams was Eir, with HSE second; Revenue was best in grade B, ESB in grade C and OPW in grade D.

Paul Pollock finished second in the Brighton Half Marathon on Sunday (February 24) in a time of 66:35. It was a first race for Pollock in some months.

“Absolutely stunning location for my first race back in lots of months,” said Pollock after the race. “Thank you Brighton Half Marathon and all the volunteers!

“Glad to have (hopefully) put all the injuries and illnesses behind me. First time the vest and sunglasses have been out in a while!”

Rory O’Connor of North Cork AC led home a capacity 657 finishers at the Adare 10km in Co Limerick on Sunday.

First woman was Barbara Cleary of Donore Harriers in 36:06. It was a first race for Cleary in three years, and she had tuned up for the race with a few parkruns in recent weeks.

Clonliffe’s Efrem Gidey won the Duleek and District 5k in 14:42 on Sunday. Thomas Moran of Dunshaughlin AC was second in 14:54 and Ben Guiden of Clonliffe Harriers third in 15:56.

With four finishers in the top five, Clonliffe was top team ahead of Drogheda and District and Dunshaughlin AC.

First woman was Linda Byrne of Dundrum South Dublin AC in 17:17. Becky Woods of Clonliffe Harriers was second in 17:45 and Laura McDonnell of Tallaght AC third in 18:30.

Na Fianna AC was first club, with Sli Cualann and Drogheda and District second and third.

Noel Kerr and Gladys Ganiel were the winners of the Born to Run Castlewellan 10k on Saturday – the final round of this year’s Born to Run series.

Mooney finished the 9.7km course in 38:06 with Brendan Murphy of Crusaders AC almost three minutes behind for second in 41:01 and Barry Minnock of Rathfarnham WSAF third and first M40 in 41:54.

First woman was Kate Cronin of Raheny Shamrock AC in 45:03. Aoife Coffey of Lucan Harriers, who is still a junior, was second woman in 47:10. Niamh Corbett from Cork was third in 49:06.

St Malachy’s Conall McClean ran 15:33 at the Belfast Victoria parkrun to record the fastest men’s time across Ireland on Saturday.

Catherina Mullen claimed the women’s quickest honours after running 17:21 at the Porterstown event in Dublin.

The fastest times from Irish parkruns this weekend can be found here.