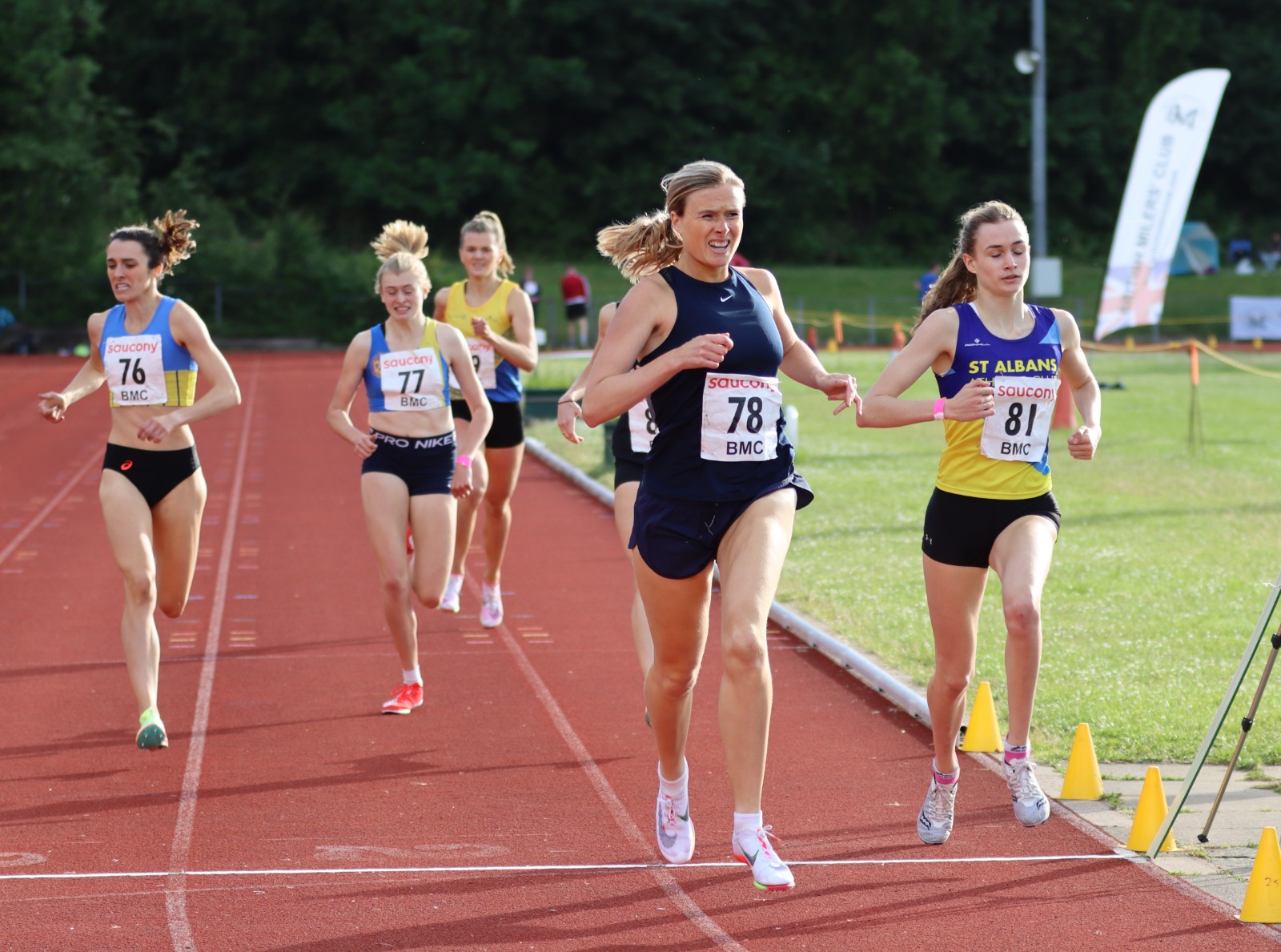 Ian Guiden of Clonliffe Harriers has his second win in as many weeks when he led home 764 finishers at the Irish Runner 5-Mile in Dublin’s Phoenix Park on Sunday (June 12).

Guiden had a comfortable victory with his time of 23 mins 44 secs, putting him well clear of Peter Somba of Dunboyne AC who finished in 24:20. Third in 24:24 was Evan Fitzgerald of Clonmel AC.

In the masters’ categories, Brothers Pearse, led by Sinead Tighe, won the W35 title ahead of Donore Harriers and Raheny Shamrock, while Raheny took the M35 title, led by Ciaran McCarthy. Brothers Pearse was second and Crusaders third.

Team winners in the over 50 grade were the Lucan Harriers women and the Inishowen AC men, led by Pauric McKinney who finished 15th overall and first M55.

At Kilmacow, Co Kilkenny, also on Sunday, Ray Lahart of Gowran AC won the Little South Run 4-Mile, just holding off Warren Roche ,of Ferrybank and Kilmacow Road Runners, with only three seconds in it. The pair were timed at 21 mins 56 and 21:59.

James Ledingham of Kilkenny City Harriers proved the class of the field at the Mile Marker 5-Mile road race in Danesford, Co Kilkenny.

Ledingham led from early on and finished in 26 mins 19 secs. Second in 20:05 was Paul Browne of Slaney Olympic AC, with Sean Delaney from Marino Institute of Education AC third and first M50 in 30:33.

First woman in 31:50 was Caolite Malone of Thomastown AC. Vivian Fennelly of King’s River AC was second in 33:39 and Adele Walsh of St Senan’s AC a close third in 33:41.

Dominating the 10-mile race was former Irish international athlete Brian Maher of Kilkenny City Harriers who had over three minutes to spare when winning in 55 mins 27 secs. Brian Slattery of Tramore AC was second in 59:35 and John O’Brien of St Finbarr’s AC third and first M50 in 60:01.

Clive Clancy of Carrick AC in 33 mins 55 secs and Adrianna Mulligan of Longford AC in 36:36 were the winners of the Sliabh Bán AC 10km held in Strokestown, Co Roscommon. Second overall was Patrick Sharkey of Longford AC who finished just four seconds behind Clancy in 33:59.Tom Feely of Trim AC was third in 34:17. Second woman was Sydney Waterbury in 41;29.

Shane Toner made it a home win at the Glenmore 10 Mile on the Cooley Peninsula on Saturday morning (June 11).

Toner finished in 57 mins 51 secs just over a minute clear of Drew Fowler from Ballydrain Harriers in 58:58. Third and first M40 was David Brady of Clonliffe Harriers in 62:27, while fourth and first woman was Jan Corcoran of Le Cheile AC in 63:17.

Second woman and first W50 was Ann Terek of City of Lisburn AC in 73:29 while third woman was Eimear McCracken of Annadale Striders in 74:12.

Donal Coakley of Leevale AC and Annette O’Reilly of Kilfinane AC were the winners of the Doneraile 10km, held in Co Cork on Saturday.

Coakley’s time of 34 mins 25 secs put him over two minutes clear of the chasers led by Darren Coleman of Buttevant AC in 36:29. O’Reilly finished tenth overall in 41:22. Second was Lisa Finn of Mallow AC in 44:19.

London-based James McDonald, whose grandmother is from Ardara, was the winner of the Donegal Wild Atlantic Marathon in 2:43.48.

Julie McNamee from TirConnell AC was first woman in a time of 03:22.55. It was McNamee’s third appearance at the race. The course starts in Killybegs and ends in Glencolmcille, with quite a few hilly stretches to negotiate in between.

Half Marathon winners were Shane O’Donnell of Rosses AC in 77:05 and Dublin-based Luken Kavanagh in 90:10.

At the Letterkenny Gaels 5km, Noel Diver of Rosses Ac was the winner in 16:50, 13 seconds ahead of Milford AC’s Joe Gibbons, while Stephen Robinson was third in 17:09.

Making it a double double was Helen McCready first woman in 18:19, over two minutes ahead of her clubmate Martina Mulhern who finished in of 20:28, twith Milford AC’s Danielle McNamee two seconds behind for third.

Friday night under the lights

Dunboyne AC’s Peter Somba proved bravest of the brave when he won the revived Braveheart 5km on trails around Trim in Co Meath on Friday evening (June 10).

In a competitive women’s race, host club Trim AC made it a clean sweep with junior athlete Ava Costello first home in a time of 18:47, Edel Gaffney five seconds adrift for second and Cailin McDonagh third in 19:32.

First junior man was were Kian McGee of Navan AC in 18:37.

On the same evening, Sergiu Ciobanu of Clonliffe Harriers, in 25 mins 26 secs, was the winner of the Dromana 5-Mile from Villerstown to Cappoquin – one of the few remaining point-to-point road races on the calendar.

Roisin McLaughlin of Grange/Fermoy AC was first woman in 30:52, followed by Sarah Mulcahy of St Catherine’s AC in 32:19 and Kelly Fitzgerald of West Waterford AC in 32:32. Best of the master women was Beth O’Connor of United Striders AC in 33:54.

Mick Fogarty was the winner at the Naomh Mhuire AC 5km, which was round 5 of the Offaly 5km Series.

Fogarty finished in 15 mins 38 secs, with John Fitzgibbon of Thurles Crokes AC second in 15:45 and James Keegan of Mullingar Harriers third in 15:48.

Nadine Donegan and Emily Grennan, both from Tullamore Harriers, were the first two women in times of 17:35 and 17:45 respectively. Third in 18:02 was Denise Egan of Ferbane AC. Rocco Zaman Brown of Dundrum South Dublin AC, who is now eligible to run for Ireland, was fifth behind English in 1:47.86.

In the men’s 1500m, Shane Bracken finished fourth in the men’s A race in 3:40.81, while in the B race, junior international Nick Griggs of Mid-Ulster AC showed that he is right back in form with victory in 3:42.71.

Irish 800m record holder Louise Shanahan of Leevale AC finished sixth in the women’s A race with a time of 4:18.02. In the B race, Carla Sweeney of Rathfarnham WSAF AC was second in 4:17.57, while winning the C race in 4:20.36 was Niamh Markham of Ennis Track Club, with Ellie Hartnett of UCD AC second in 4:22.86.

Racing all over Europe

At the Trofeo Donkenyarun in Milan, Italy, Jack O’Leary of Mullingar Harriers was tenth in the mile in 4:07.05 and Kevin McGrath of Bohermeen AC 14th in 4:13.79.

In Rome, at the Diamond League meet on Thursday (June 9), Ciara Mageean of City of Lisburn AC finished a fighting fourth in the 1500m with a time of 4:05.44.

Two days earlier on Monday (June 6) in Hengelo, Andrew Coscoran of Star of the Sea AC’s time of 3:36.54 for fourth in the 1500m put him top of the current Irish rankings.

Catch-up: Double Olympian and seven times Irish chhampion Michelle Finn of Leevale AC clocked a time of 9:46.93 for the 3000m steeplechase in Rehlingen on Sunday (June 5)

Eugene Oregon was the venue for the NCAA Track and Field Championships which took place between Wednesday June 8 and Saturday June 11.

Mickie Brennan was the winner of the Wicklow Way solo race which started at 9pm on Friday evening (June 10).

Matthew McConnell was a clear winner of the Devil’s Glen trail run in Co Wicklow on Wednesday (June 8) after a last minute change of venue due to ongoing felling in Djouce woods.

McConnell completed the 8km race in 34 mins 15 secs. Warren Swords of Crusaders AC was second in 36:36 and Becky Quinn first woman in 39:43 with Harriette Robinson of DSD AC second in 42:51.

Over in the USA, The North Face athlete Paddy O’Leary was second at the 111th Dipsea race, which looks to have some kind of handicap system for start waves. Given the competitive levels of trail running in the USA, this is another solid result for O’Leary.