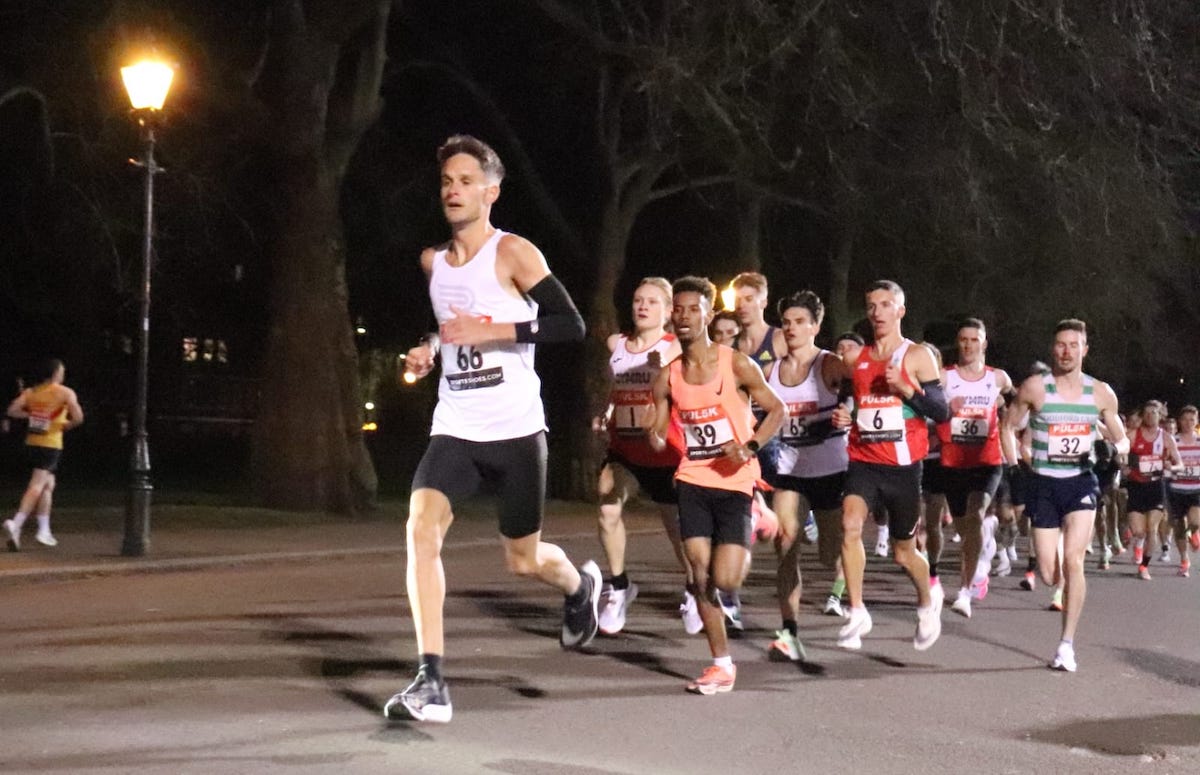 What a week! It has had it all, with excellent performances to bring you from the roads, cross country and track. Let’s get straight to it.

Speedy in the Sun

As I write this, it is grey, wet and windy outside. It feels somewhat unfair, therefore, to start this week’s round up in Dubai where google tells me it is over 20 degrees warmer and distinctly sunnier. That is where Eilish McColgan is currently based, and on Saturday she took to the streets for the Super Sports Meydan Run for her first 5k since 2016.

Based on the time elapsed and her super form last year, it was clear her 15:57 PB was ready to be rewritten – and that is exactly what happened, finishing in 14:48. That time matches Paula Radcliffe’s best and may or may not count as the British Record for the distance (Beth Potter ran 14:41 last year, although was not ratified by World Athletics), but is a fantastic start to 2022 regardless.

The Scot races again at next week’s RAK Half Marathon, a notoriously fast course, and it will be fascinating to see how close she can get to her 67:48 PB from last year’s Great North Run.

About killed me getting up at 5am this morning 🤣 but it was worth it, to come away with a new PB. 💫 pic.twitter.com/39SNYjynus

The Armagh 5k is renowned for its ability to see athletes perform at their best, and its 2022 cancellation disappointed many. However, the coming together of two other fast race organisers, Friday Night Under Lights and Podium 5K, saw the creation of PUL5k to give athletes an alternative racing opportunity at the fast Battersea Park.

Near perfect conditions allowed for some fantastic results, with seven men running sub-14:00 and 43 sub-14:30. They were led home by Jack Rowe (13:42) for his second win on this course after a 13:36 last year, the fastest time of 2021. A close battle was brewing behind, with the next four separated by just three seconds, Michael Ward (13:54) just getting the better of Alex Lepretre (13:55), Sam Charlton (13:56) and Ben Bradley (13:57). All four were rewarded with big PBs with them running under 14 minutes for the first time. The women’s race was equally fast, with 12 seconds separating the top five. American Allie Kieffer, a 2:28 marathoner, ran a lifetime best to take the win in 15:52, closely followed by a Welsh trio of Charlotte Arter (15:56), Cari Hughes (15:57, her debut over the distance) and Beth Kidger (15:57 PB), with Sarah Chapman rounding out the top five with 16:04, again a lifetime best.

I could write chapter and verse about some of the other noteworthy performances, but you’d be reading this until tomorrow. However, I will mention an impressive outing for Charlotte Alexander, who took 16 seconds off her PB with 16:12, just 48 hours after her first indoor race in five years (a 4:30.74 1500m at Lee Valley).

There has been so much happening on the track in the past couple of days that it is hard to know where to start. One thing is for sure, the indoor season continues at pace as the World Indoor Championships move ever closer.

Let’s start Stateside, at Boston University’s David Hemery Valentine Invitational, where Marc Scott smashed his own British and European Indoor Records over 5000m with 12:57.08, becoming the first Brit (and European) to ever run under 13 minutes indoors. He was followed across the line by Sam Atkin who also had an incredible run, taking over 30 seconds off his previous indoor best with 13:03.64, a time faster than Scott’s old British Record that elevates him to fourth on the UK all-time list, indoors or out. Both also secured qualifying marks for July’s World Championships.

⚠️12:57.08⚠️New British & European Indoor Record tonight. Couldn’t have done it without these two and all the guys not pictured. @bowermantc on a MISSION!!!#MadMarc #BostonMagic #Sub13 pic.twitter.com/HMdj1aUm96

In an earlier race, Dundee’s David Melville ran under 14 minutes for the first time with 13:55.89.

The women’s races over the same distance were equally impressive. Gabriela DeBues-Stafford, former training partner of Laura Muir and Jemma Reekie, broke the North American (and Canadian) Record with 14:31.38 and Elise Cranny the US Record set back in 2009 (14:33.17).

However, the highlight was seeing Jenny Nesbitt finally get her step-change 5000m race with 15:19.22, after so many 15:30 runs over the past 12 months. Her time is an outright PB (by 11 seconds), Welsh Record, moves her to third all-time on the British indoor list, and is under the qualifying standard for the Commonwealth Games and European Championships.

The shorter distances also provided plenty of talking points, including a 3:35.32 1500m for Neil Gourley, an outright PB that moves him to third on the UK all-time list behind Peter Elliot and fellow Scotsman Josh Kerr. There was a World Indoor Q for Charlie Grice in the same race with 3:38.00.

Boston was not playing host to the only Brits in action over the weekend. At the Husky Classic in Seattle, Charles Hicks made his indoor 5000m debut with 13:37.08, placing him second on the British U23 all-time list – sitting behind Steve Binns’ 13:29.28, which was run precisely 40 years to the day previously!

Moving down in distance to the 3000m, where Jake Heyward and James West joined the ever-growing list to have run the 3000m standard for the World Indoor Championships.

West’s 7:44.73 at the Badgers Windy City Invite in Chicago was an indoor PB that improves his own Tonbridge club record and came just a day after pacing American duo Cole Hocker and Cooper Teare to 3:50 miles.

Moving to Washington and the Lilac Grand Prix, where Jake Heyward’s 7:48.83 took over three seconds off Ian Hamer’s 30 year old Welsh Record. At the same meeting, Josh Kerr set an indoor best over 800m (1:46.64) and moved to third on the Scottish all-time rankings behind Tom McKean and Brian Whittle.

Plenty has been happening on the European circuit too. Wednesday saw Adelle Tracey compete over 1500m at the Meeting Mondeville in France. Following on from a fantastic debut over the distance indoors at last week’s Czech Indoor Gala, the Hoka-sponsored athlete ran 4:11.10.

Bringing the indoor action to a close is the BMC. After a successful opener in Sheffield last month, Wednesday saw the second British Milers Club indoor meeting of the year, held in conjunction with a middle-distance open event at Lee Valley.

With races held over 800m and 3000m, the quickest performances on the night went to Ben Claridge (1:49.29, equalling his PB) and Erin Wallace (2:03.10) over the short distance, the latter setting a track record and bettering Shelayna Oskan Clarke’s BMC record. In her first indoor race since a 50m hurdles aged 12, a largely solo run saw Almi Nerurka run an impressive 9:22.18 for 3000m, whilst Tonbridge’s Alasdair Kinloch dipped under eight minutes for the first time with 7:59.77. Love is in the Air

Organised by 26.2 Road Runners and taking in the sights of Chessington and Epsom & Ewell, the Valentine’s 10k made its return after a COVID-enforced absence last year. It provided a comfortable margin of victory for Tom Austin (30:53), crossing the line almost half a minute ahead of James Denne (31:18) and Ben Kruze (31:25) and taking 21 seconds off his five-year old PB in the process. Possibly more impressive was Helen Gaunt. Her 35:35 is over two minutes faster than her previous best, run back in 2014, and saw her finish close to a minute in front of Kate Rennie (36:22) and Alexa King (37:06).

Chessington wasn’t the only location hosting a Valentine’s Day themed run this weekend, however. A commanding performance by Ronny Wilson (30:22) was rewarded with a finish time over a minute ahead of the rest of the field at the Run Your Heart Out Valentines 10K in Scunthorpe. It was a bit closer amongst the women, with Lindsay Skinner (35:44) finishing a few seconds ahead of Charlie Hanson (35:57).

Moving north of the border, the Blast Running Valentines 10K in Edinburgh saw Claire Bruce (35:28) and Josh Dack (33:41) take the honours, the latter running a near-30 second PB.

It was the turn of William Knight (32:28) and Kerstin Sung (39:34) to take the titles at the Ashford & District 10k, whilst Orion Harriers’ Alex Hardy (34:41) and Heather Timmis of Gade Valley Harriers were first across the line at the Love Welwyn Garden City 10k.

On a course around Llandudno Promenade and Great Orme, the Nick Beer Memorial 10k went to Sara Willhoit (35:35) and Daniel Kashi (32:55). There was over a minute between the first and second finishers at Sunday’s Harrow Hill 10k, with T McCarron (34:05) finishing ahead of Rupert Allison (35:09). Lizzy Allison was rewarded with an even bigger margin, her 39:50 over two and a half minutes ahead of Joanne Kent (42:26).

Moving to the longer distances, and two half marathons held on Sunday. The Nottingham Holme Half Marathon provided Hannah Stewart (86:43) and Richard Gibbs (74:09) with wins over 13.1 miles, with the shorter 10k going to Patric Clark (34:56) and Natalie Bunce (39:33). Finally, on what I can only assume to be a somewhat challenging course, the Oulton Park Half Marathon provided Dan Durkin (83:29) and Sarah Whyman (95:24) with race wins.