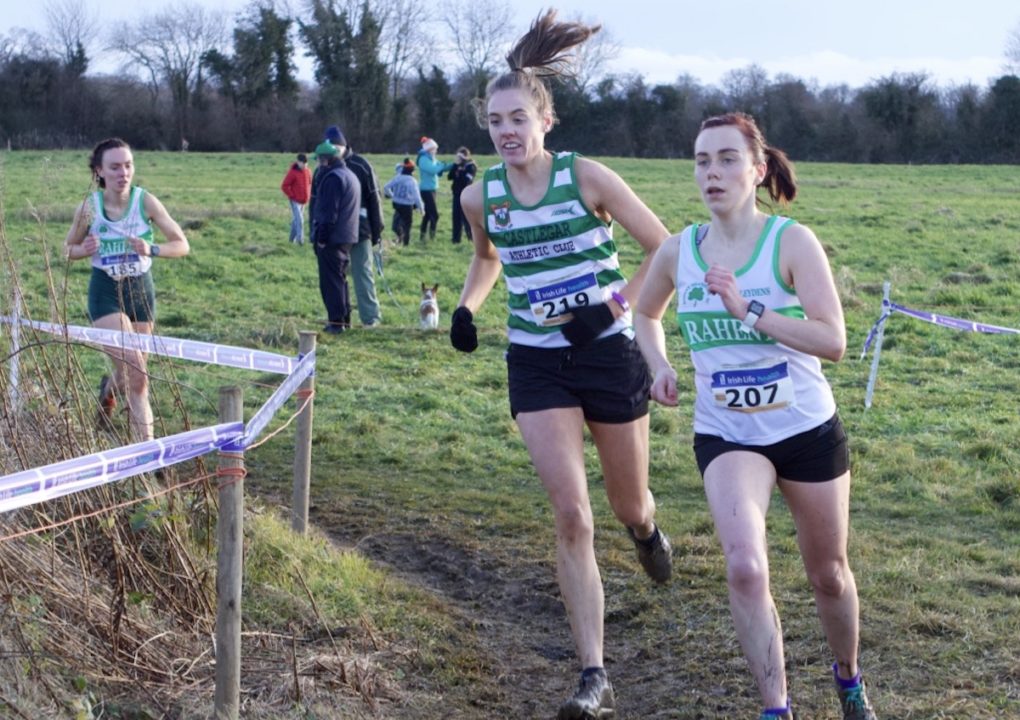 It was a muddy weekend in Ireland, which led to perfect cross country conditions… well interesting conditions. Here is your full weekend roundup-up from Lindie Naughton.

After a fast start, a group of five had taken over at the head of the race, and right until the final 1500m lap, any one of the five could have come out on top. Only in the final 800m did Devane and Tom Lupton of Portlaoise AC pull away and after turning the corner into the finish straight, it was an eyes balls out effort for the pair of them with Devane coming home first. Finishing third was Gerry Forde of Slaney Olympics.

In the women’s 4km, there was a clear win Cliona Murphy of a new-look DCH squad which had four in the top ten at one point in the race. Hilary Hughes, who is between clubs, finished second and Caron Ryan of Craughwell AC third.

At U19 level, Michael Morgan of Sligo AC was an impressive winner of the boys’ 4km race, dominating from early on. Conall McClean of St Malachy’s AC finished second despite a big effort by Daniel Stone of Raheny Shamrock to catch him in the closing stages of the race.

In a Munster-dominated girls’ U19 race, Niamh O’Mahoney of An Riocht AC was the winner ahead of Una O’Brien from Waterford AC and Lucy O’Keeffe of Youghal AC. Springwell AC’s Neil Johnston was the winner of the North West Cross-Country in the Gransha Grounds, Derry, on Saturday (December 14) which was the fifth round of the annual cross-country league.

Johnston finished in 19 mins 26 secs, with Mark McKinstry of North Belfast Harriers second in 19:45 and Craig McMeechan of North Down AC a close third in 19:46. Finishing fourth and first M45 was Declan Reed of host club City of Derry Spartans. First junior was Sean Mullarkey, also from Derry Spartans, who was 11th overall in 20:47.

First woman was Rachel Gibson of North Down AC in 22:24. Her clubmate Katie Moore was second in 23:06 and Natalie Hall of Armagh AC third in 23:27. Cara Laverty of City of Derry Spartans was first junior woman in 24:29.

Last year’s race winner Hiko Tonosa of Dundrum South Dublin AC returned to Co Cork on Sunday (December 15) for the annual Newmarket Christmas Classic 5km where he again was first home this time in a brilliant new course record of 14 mins 11 secs.
Second was Rory O’Connor of North Cork AC in 14;32 with Niall Shanahan of An Bru AC just a second behind for third and the top five all under 15 minutes.

A clear winner of the women’s race for a fourth consecutive year was Michelle Finn of Leevale AC who finished 15th overall. Her time of 15:49 knocked 44 seconds off her own course record. Finn’s Leevale team mate Niamh Moore was second in 17:46, with Martina Kiely of St Finbarr’s AC third and first W35 in 18:10.

Finishing third was Thomas Carson of Willowfield Harriers, while fourth and first woman was Ciara Hickey of Brothers Pearse AC in 17 mins 32 secs. Catherina McKiernan of Annalee AC was second woman and first W50 in seventh place overall, and Catherine O’Connor of East Down AC third.

Host club Drogheda and District was first in both team categories. They finished comfortably ahead of Balbriggan and District and North East Runners in the men’s competition, but only three points clear of Celbridge AC when it came to the women; Cilles AC was third.

Pauric Ennis of Tullamore Harriers in 33 mins 10 secs and Edel Gaffney from Virginia in 39 mins 31 secs were the winners of the Aware 10km in the Phoenix Park on Saturday (December 14). Eoghan Murphy of Clonliffe Harriers in 16:35 and Sadhbh Byrne in 30.28 were first home in the 5km.

Away from the mud and the cold…

Quickest of the men was Brian Fay of Raheny Shamrock, fresh from his performance in the U23 race at the European Cross-Country a few days earlier, with a time of 8:04.51.

In the 60m, fastest men’s time of the night was a 7.03 secs recorded by Aaron Keane of Tullamore Harriers. Of the women, Lily-Ann O’Hora of Dooneen AC ran 7.87 secs.