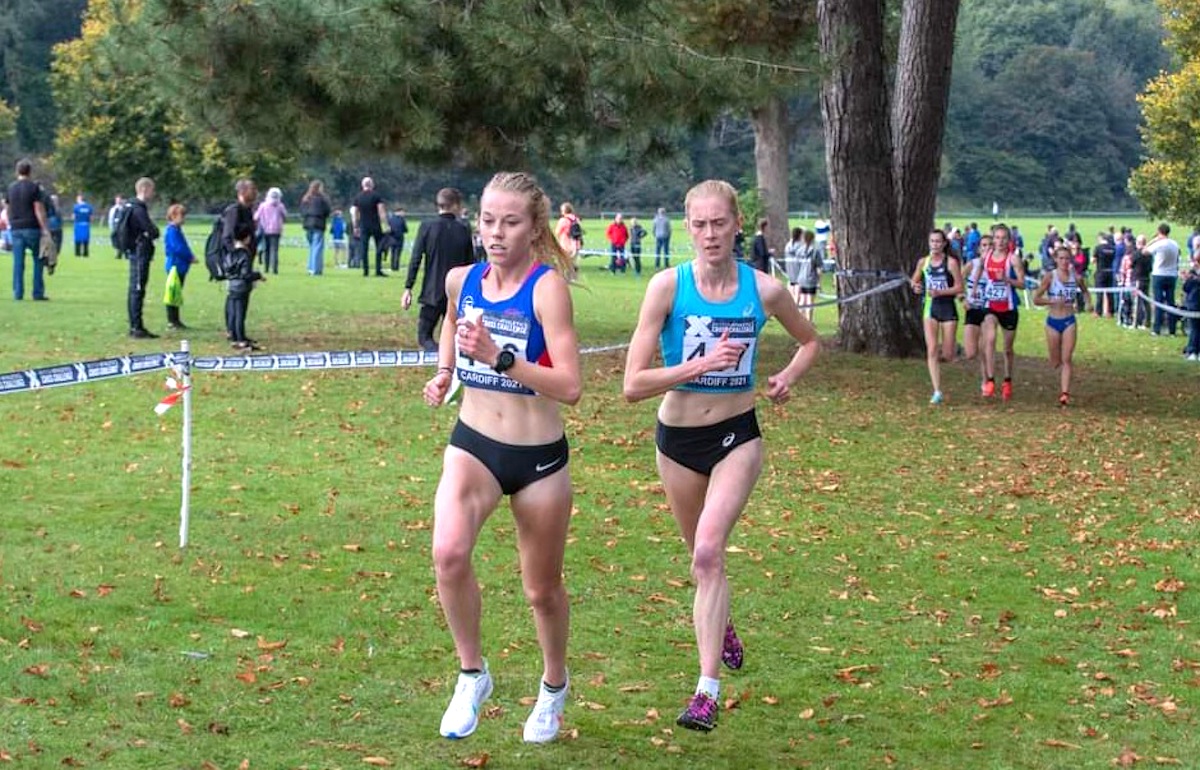 This weekend has it all; record breaking performances on the road, both in the UK and further afield, and Cross Country makes a most-welcome return with a bang. Let’s get straight into the action!

To quote the famous song, ‘oh I do like to be beside the seaside’. I am sure that was how Eilish McColgan was feeling the curtain came down on her season at the Great South Run.

This morning saw Eilish start her seventeenth race of the year, and what a year it has been. The Scot’s impressive summer track season, the highlight being breaking Paula Radcliffe’s British Record over 5000m in Oslo in July, has successfully transitioned into an equally successful road season, including a win at the Great Manchester 10k and a second-placed finish at the Great North Run in her debut at the half marathon.

That season drew to a close in emphatic fashion with not only a win at the Great South Run (50:43), but an obliteration of Paula Radcliffe’s British Record – by 28 seconds – and Sonia O’Sullivan’s 19-year old course record by 17 seconds.

The Portsmouth coastline is known for its ability to lend itself to fast times, especially when the weather cooperates as it did today, but I do not think I am alone in struggling to find the words to describe such a run.

If I am correct, it is the fastest at the distance in over a decade and, whilst Paula Radcliffe, Mary Keitany and Lucy Kabuu have gone faster en-route in longer distance races, only Linet Masai (50:39) has run faster in history in a standalone 10 mile race. Incredible.

In a high-quality domestic field, it was Jack Rowe (47:20) who crossed the line first, ahead of Emile Cairess (47:38) and Daniel Jarvis (48:48). The Aldershot athlete is another to have had a fine season, setting lifetime bests at distances ranging from 1500m to the half marathon, and his win in Portsmouth was also his debut over the distance.

It may usually be one of the lesser-run distances on the calendar, but this weekend didn’t see just one but three high quality races over ten miles. There was an even more commanding win for Sarah Astin amongst the women, her time of 57:09 seeing her cross the line over five minutes before second placed Eliza Hawthorn (62:37) and local athlete Sarah Palmer (64:04).

A couple of hundred miles north, Jordan Rowe (52:42) and Georgia Wood (61:43) took wins at the Asda Foundation Yorkshire 10 Mile. That was a 90 second PB for Georgia, and a debut for Jordan over the distance (and according to Power of 10, the longest race of his running career).

It was not just over ten miles that athletes were taking to the streets of Yorkshire, with the Asda Foundation Yorkshire Marathon also taking place on Sunday. Following on from a 2:21:59 PB at the Cheshire Elite Marathon in April, Tom Charles took the third marathon win of his career with a time of 2:24:22 after previously recording victories in Chester and Abingdon. The Trafford athlete finished precisely two minutes ahead of second placed Scott Harrington (2:26:22) on the relatively flat course, with Anthony Woodward (2:29:03) rounding out the top-three.

Another alumni of this year’s Cheshire Elite Marathon took the title in the women’s race, with Becky Pentry’s 2:47:43 seeing her cross the line ahead of Melissah Gibson (2:49:30) and Hannah Roberts (2:57:05). After a six year break from the distance before April, that time is the Knavesmire athlete’s third best over 26.2 miles.

My Fast Running co-writer Gill Bland finished in 3:01:12 as the fifth finisher, an impressive performance just two weeks after running in London.

As you would expect for a race in the Netherlands, the Amsterdam Marathon provides a pancake-flat course that, in the right conditions, can allow athletes to perform at their best. With cool conditions and a minimal breeze, it seemed plausible for the course records, both set in 2018, to be bettered.

A group of six women passed through 10km in 33:00, dropping to five before the halfway point, reached in 1:10:07. Four athletes, Kenyan duo Angela Tanui and Maureen Chepkemoi alongside Ethiopians Haven Hailu and Gabiyanesh Ayele, went through 30km in 1:39:37 before Tanui put in a decisive break that the rest of the field could not get back to.

Increasing her speed as the finish got closer, Tanui crossed the line in the Olympic Stadium in 2:17:57, taking almost 90 seconds off the course record and improving her PB by over two minutes, jumping to tenth on the all-time list in the process.

Dedicated to a fellow athlete

It was a deserved win for Tanui after a period of disruption to her racing plans, having entered the postponed Tokyo Marathon and being forced to miss Monday’s Boston Marathon due to visa issues. She dedicated her win to Agnes Tirop, the 10km World Record holder (pending ratification), who was sadly killed this week.

Tamirat Tola, who won a bronze medal over 10000m at the 2016 Olympics and silver at the 2017 World Championships in the marathon, showed his racing pedigree with a burst of speed to build a sizeable gap by the 40km point. The gap continued to grow as the finish line beckoned, which Tola crossed in a 2:03:39, a new course record, Dutch all-comers record and PB.

Amsterdam was not the only capital city hosting a major marathon this weekend; with Paris joining the act of providing both fast elite performances and a mass-start race.

Usually held in April, the eyes of the Paris Marathon field were set on Kenenisa Bekele’s 2:05:04 course record set in 2014.

As in Holland, the French capital provided good weather conditions which Kenya’s Elisha Rotich made the most of, his 2:04:21 performance taking almost a minute off his lifetime best and breaking the course record. Ethiopia’s Hailemaryam Kiros finished second. Kiros’ compatriot Tigist Memuye topped the women’s podium with a time of 2:26:12, just three seconds ahead of Yenenesh Dinkesa.

Rewinding to Monday, the Boston Marathon continued the flurry of World Marathon Majors taking place this autumn, with Benson Kipruto (2:09:51) and Diana Chemutai Kipyogei (2:24:45) taking victories on the notably difficult course. After a return from retirement, Ireland’s Stephen Scullion finished in 2:22:57.

Back to the UK

Sunday’s Chelmsford Half Marathon provided James Nial (1:15:48) and Jackie Stretton (1:24:33) with race wins, the latter finishing over nine minutes ahead of the rest of the female field. Unfortunately, at the time of writing, results were not available for the associated Chelmsford Marathon.

Taking place a few miles outside Norwich, Lindy-Lee Folscher (87:15) and Neil Adams (75:53) were crowned victors at the Autumn Bickling Half Marathon.

One of many 10ks races this weekend

The inaugural Knutsford 10K provided Team NBMCR’s Adam Craig with a clear win (28:53) in his first race since pacing at the London Marathon two weeks ago. V40 Sarah Murphy toom the honours amongst the women with 37:40.

Ever reliable in bringing a host of events across the country, RunThrough delivered competitions at four venues this week, with each offering a range of distances.

The Running Grand Prix at Bedford Autodrome gave athletes the chance to race distances between 5k and the marathon. Kevin Francis (2:36:47) and Diane Morrison (3:20:16) took convincing wins over the longest distance, with margins of victory of 10 and 26 minutes respectively.

Saturday’s races at Battersea Park also saw the quickest time in the 10k recorded by a woman called Sophie, with Sophie Hamblin (38:23) finishing ahead of Chris Xenos (32:38). In the 5k, quickest times were set by James Harding (16:30) and Laura Goodson (18:30) over the two lap course.

First but no cigar for Inglis in Canada

Out in Canada, on Toronto’s Lake Shore Boulevard, there was the Canadian 10k Champs with a Scottish twist. Sarah Inglis, a Sottish international and permanent resident of British Columbia, forced the pace from the start.

The women’s elite race started fifteen minutes ahead of the elite men’s, so she found herself pushing hard into a head wind over the first half of the race before the course turned 180 degrees for the return leg.

Over the final three kilometres, it was the Scot with only Leslie Sexton, another recently arrived Vancouver resident, for company. Cleo Boyd and Natasha Wodak were the nearest pursuers. Inglis and Sexton pushed each other hard and were rewarded with PBs of 31:59 (Inglis) and 32:04 (Sexton). As she crossed the line, Sexton pumped her fist hard realising she was Canadian champion.

The best of the rest

By my count there were another eight 10km races taking place on Sunday (or, at least, this is the number for which results are available via Power of 10, apologies if I have missed any other races as a result of this reliance!).

It is quite hard to find non-repetitive ways of writing who won races over the same distance so I shall simply get straight to the point and bring you the race winners. Deep breath.

The quickest of the races below was Samuel Moakes (30:51) at the Derby 10k, where Rebecca Miller was the fastest female with 40:30.

Covering the full spectrum of road races this week, the Flintshire 5k saw David Burrows (17:54) and Ellie Small (20:09) rewarded with the fastest times across the line. Milner, Ahmed and Smith battle it out at the front in Cardiff. Photo: Paul Stillman

If two weeks ago the running community’s appetite for cross country racing was heightened with events like the low-key East Surrey League, then Saturday certainly provided eager athletes with plentiful opportunities to take to the mud, with the first fixtures of the Chiltern League, Kent League, Met League and Surrey League, amongst others, all taking place.

In a strong men’s field, the Derby athlete was able to hold off Omar Ahmed, with whom he had been running stride for stride with as the finish line approached, to take the win in 27:18 to Omar’s 27:20. Jake Smith, fresh from pacing Phil Sesseman at the London Marathon, finished third in 27:29.

It was Welsh duo Charlotte Arter and Jenny Nesbitt who led from the outset in the women’s race, building a commanding lead ahead of a field including Kate Avery, Jess Gibbon, Hannah Irwin and Izzy Fry after the first lap. Arter, retaining her 2019 title, completed the 6.4km distance in 20:11, with Nesbitt second and Jess Gibbon third.

The U20 titles went to Ireland’s Dean Casey and Megan Keith.

Epsom not just a great race for horses

The Surrey League saw the women’s races and men’s Division 1 races held in Richmond Park, with the remaining men’s races held at the undulating Epsom Downs.

With 249 athletes taking to the start line, Hercules Wimbledon took a convincing team win in the men’s Division 1, with Belgrave’s Dylan Evans just pipping Guildford’s John Sanderson to the line (25:57 to 26:03). In Division 2, Croydon Harriers’ Dom Nolan continued his fine season with a commanding win at Epsom Downs, with Dulwich taking top spot amongst the nine teams competing.

Cambridge Harriers took the top three in the women’s Kent League at Swanley Park, led by Holly Dixon (30:55) ahead of clubmates Kate Curran (31:28) and Megan Marchant (32:57).

Other XC races taking place over the weekend included the first Met League fixture of the season at Claybury Park, the Chiltern League at Shotover Hill and Manchester Area League in Wythenshawe Park. At the time of writing, finalised results were not available online.