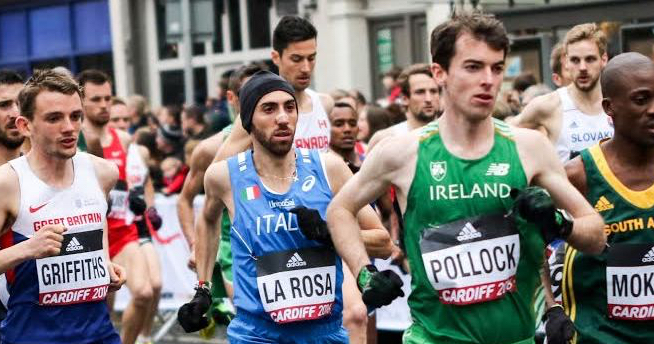 Paul Pollock and Lizzie Lee are among a top Irish team set for the IAAF World Half Marathon Championships in Valencia on Saturday (March 24).

Joining Pollock in the men’s team for the 23rd edition of the championships is Stephen Scullion, Kevin Dooney, Kevin Seaward and Sergiu Ciobanu. While Lee is joined in the women’s team by Laura Graham, Fionnuala Ross, Claire McCarthy and Laura Shaughnessy.

“I’ve been looking to do well here. I feel in good shape,” said Pollock. “I’ve had lots of quality miles in. I’m healthy and ready to race. And it looks like the kind of flat, rapid course where I can challenge my personal best.”

However, fellow Northern Irish runner Scullion has been the most impressive this year over 13.1 miles with a 63:16 PB in Houston at the start of the year.

Elsewhere, Commonwealth Games bound and Irish Olympian, Seaward, will line up after setting a personal best of 29:36 at the Telford 10k in January.

Class of 2018‘s Dooney will be full of confidence after his PB in Barcelona last month, while Ciobanu completes the men’s team after running a 2:16:05 marathon last November in Seville.

At the front of the men’s race, Kenya’s Geoffrey Kamworor aims for a third straight crown, while Ethiopia’s Jemal Yimer and Kenyan Jorum Okombo are the fastest this year with 59:00 and 59:36 performances respectively.

Swiss runner Julien Wanders, who broke his nations half marathon record in Barcelona in February, is the third fastest this year with 60:09. While the impressive Ethiopian Leule Gebresilase also lines up after running the second-fastest ever marathon debut in Dubai earlier this year.

Rio 2016 marathoner, Lee, heads the Irish women’s team after a fantastic 73:24 personal best in Barcelona last month. The 37-year-old Cork native is joined in the team Irish marathon champion Graham, who ran a personal best 75:15 to finish 12th at the Big Half in London.

World Championships marathoner McCarthy, along with Ross and Shaughnessy will all aim to be one of the three counting members of the team.

The women’s field is stacked and is spearheaded by Kenya’s 64:51 world record holder Joyciline Jepkosgei and Bahrain’s Eunice Chumba.

Kenya’s Fancy Chemutai, who missed Jepkosgei’s world record by one second at the RAK half marathon in February, was set to compete but is a late withdrawal, with the defending Kenyan winning team completed by Ruth Chepngetich and Pauline Kamulu.

Action from Valencia’s will be available to watch on the BBC red button and online and well as live stream in one of two ways: via the IAAF’s YouTube channel or Facebook page.

More information can be found here.

Here’s a complete list of those territories and more information can be found here.