English athletes impress in Spain and marathon action in Portsmouth 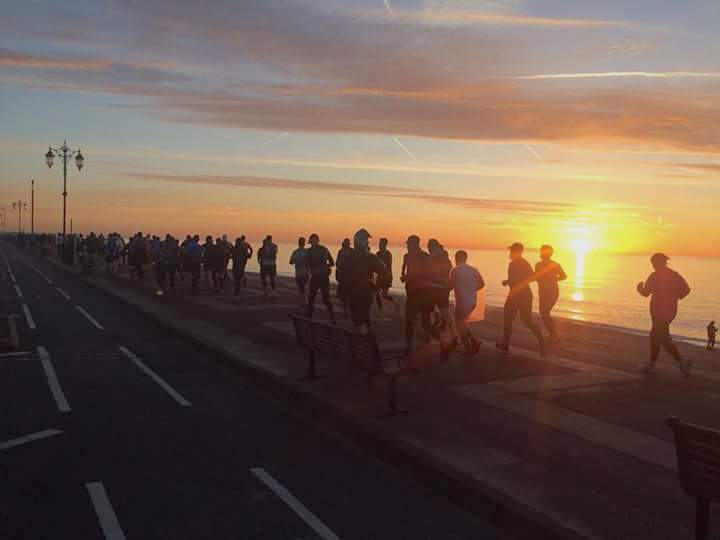 Elsewhere, there was marathon action in Portsmouth and Harry Holmes and Nichola Jackson won the Stoop fell race.

On a wet and windy day on the South Coast, the Portsmouth Marathon hosted 878 runners, with Stuart Nicolas (Bournemouth Athletics Club) taking the win in 2:47:12, followed by Neil Kevern (Bracknell Forrest Runners) 2:49:29 and in third Andrew Pace with 2:57:01.

Both England and North of England teams travelled to Spain this weekend to compete in the Venta de Banos, International Cross County. On a very fast and firm course, Ethan Hussey had a great run for the North, winning the junior boy’s event by over a minute. Along with the stand out performance from the young Leeds City athlete, other top results included England’s Nick Goolab (Belgrave Harriers) finishing a very classy third in the senior men’s race behind Jacob Kiplimo (Uganda) and Selemon Shirtaga Barega (Ethiopia).

With some icy conditions underfoot, a field of 288 runners still took part in the 5 mile Turkey Trot race.

In a close finish, Gary Priestley (Salford Harriers) was overtaken on the descent by Keswick AC athlete Carl Bell. Carl who specialises in fell running took the win by five seconds over the multi terrain course.

Salford duo Gary Priestley and Josh Tighe were second and third. Tighe told Fast Running he would have won if he had not have eaten a salmon bagel that morning. He added: “the taste of salmon throughout the race was enough to put me off my notoriously healthy eating regime!”

Nichola Jackson rounded off a great season to win the women’s race. The Ribble Valley athlete achieved her first GB vest at the World Long Distance Mountain Running Championships in Italy during the summer. Jackson, whilst also dressed as an elf, finished ahead of Katie Walshaw and Louisa Powell-Smith (Mrs Clause) to make it a Ribble Valley 1-2-3.

The workout did not end at the finish line with the presentation itself a test of upper body strength and balance with runners having to carry away a mound of prizes. Hosted by Chris Barnes, the prize giving has become as much of an attraction as the race itself, including a charity auction with top prizes kindly donated by local businesses in aid of The East Lancashire Hospice.

In a second of this weekend’s Turkey Trots, this time in Wolverhampton, World Championship Marathon representative Andy Davies (Stockport Harriers) took the win in a time of 20:13. Due to ice, this year the race saw a different start and finish area used, therefore measuring less than the usual 5-mile distance. In second place Peter Brooks (Tipton Harriers) finished in 20:16, just in front of Ian Williams also of Tipton Harriers in 21:18 for third.

In the women’s race Polly Keen (Nuneaton Harriers) won in 24:59, followed by Lauren Draper (Bridgnorth RC) in second with 25:04 and in third Amie Williams (Tipton Harriers) with 26:11.

In the penultimate race organised by the long serving Dave and Eileen Woodhead, The Stoop covers 8km and 250m on the fells near Haworth. The festive theme of the weekend continued with each runner given a Santa hat, which is made obligatory to wear and every finisher receives a Cadburys Curly Wurly for their efforts!

Eleven-time winner Ian Holmes, now a Vet 50 returned to familiar territory but had to settle for fourth overall (first V50). He was beaten by Harry Holmes of (Pudsey and Bramley), who took the win in 31:07 showing just how good Andi Jones’s course record of 28:52 is. Joe Baxter also of Pudsey and Bramley took second in 31:16 and in third, under-18 athlete Joe Hudson (Keighley and Craven) with 31:32.

In the women’s race, it was a clear winner in the shape of Nichola Jackson (Ribble Valley) who took her third win on this course with 35:08, and her second win of the weekend after Saturday’s victory at the Hurst Green Turkey Trot. In second place Great Britain Mountain runner Emma Clayton (Leeds City) finished in 37:28, with Ruby Sykes of Holmfirth third (38:48).

The final race to be organised by “Woodentops” will be the Auld Lang Syne on New Year’s Eve. The couple, who were recognised on the 2015 Queen’s New Years honours list for their services to Fell Running, will be missed on the Fell Running scene. However, they assure us that they will remain ever present at races, cameras in hand and shouting encouragement.

On a flat, out and back course along the shore of Thirlmere, near Keswick, the scenic Helvelyn 10k returned for its second year. In icy conditions, the men’s winner was Jonathan Cox (Eden Runners) in 33:07, with Mark Benson (Tri Lakeland) and Ben Abdelnoor (Ambleside AC) in second and third with times of 33:23 and 34:04 respectively.

The leading woman was Ambleside AC’s and Irish international Mountain runner Sarah McCormack, clocking a time of 35:07. McCormack who now resides in the Lake District, and has a 10k best of 33:33, beat Sharon Taylor (Helm Hill) who ran 38:12 with third place going to Sophie Noon (Derwent AC) in 39:44.