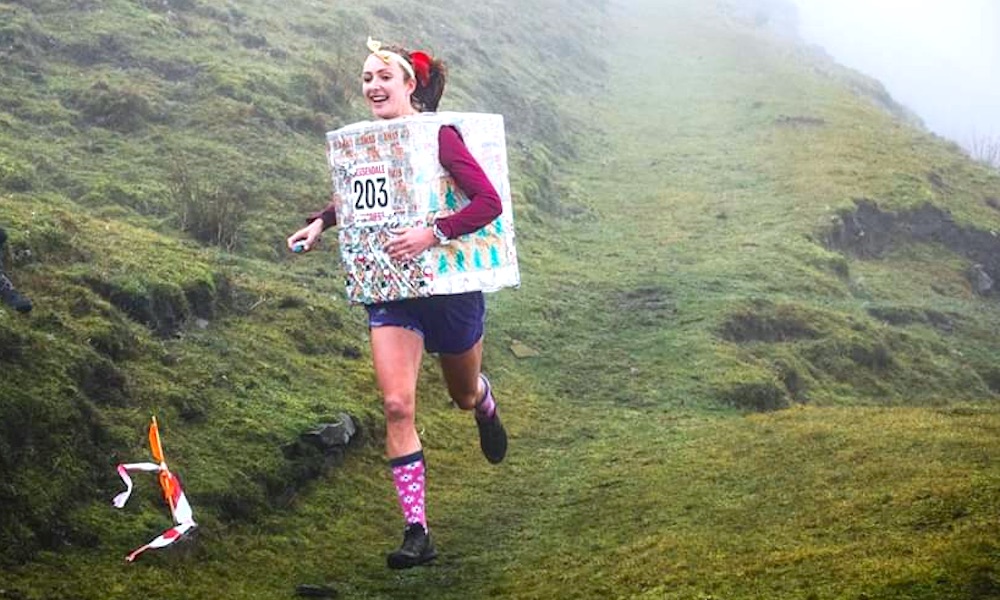 Holly Page dressed as a Christmas present seemed a good photo for this one.

Alex Bampton spins a different angle on the age old tale of Ebenezer Scrooge and we just hope it doesn’t infringe on any copyrights of the classic tale.

Two years ago (Christmas, 2017) I was visited by the three Christmas Ghosts of Distance Running. It was a particularly low point in my athletics career where I was seriously considering throwing the towel in on competitive running.

My immune system was a complete wreck. I had picked up chest infection after chest infection on an almost 1-2 month cycle for as long as I could remember. On top, of this my insomnia had become a real problem, I struggled to get any more than 4-5 hours per night perpetuating a vicious circle of illness – poor recovery – poor immunity – illness.

When I wasn’t in a drug-induced stupor from necking a cocktail of cold & flu meds and other anti-histamine based sedatives, I had begun to get quite grumpy. Bah humbug!

I was coming to the sad conclusion that I just wasn’t physically cut out for the hard graft needed to be successful in this sport. How could I possibly hope to ever train for a marathon one day if I couldn’t stitch together more than 6-weeks of good quality training? Additionally, the negative impact of chronically low immunity and poor sleep could have on my long-term physical and mental health hadn’t passed me by.

That was when I was visited by the equivalent of Ebenezer’s old friend ‘Jacob Marley’ whom shall be referred to here as such for interests of maintaining anonymity.

“I am here tonight to warn you, that you have yet a chance and hope of escaping my fate” said Marley. Truth be told the ‘fate’ he spoke of didn’t look too bad on the surface of things. Once a very promising junior athlete, Marley had walked away from the sport as an u23 following a string of classic running related ailments (plantar problems among other tendon-related issues).

Since then, Marley had made the most of all the additional ‘free-time’ not spent training, thinking about training, racing and everything in between. He rarely turned down work socials, didn’t have to mentally book out race weekends months in advance and certainly no longer worried about fitting in 60+ minute runs every evening of the week. So Marley’s next (somewhat adapted) words came as quite a shock:

“I wear the chain I forged in my running life” exclaimed Marley. “How I long to once again feel the lactic burn of a session, the start line butterflies and the joyous camaraderie that comes with endless discussions about ‘shape’, ‘segments’ and bowel-related mishaps.

My PBs are now but a relic and I find myself condemned to mentally re-running the glory-days thinking of what might have been”.

“Bloody hell Marley, that’s a bit heavy for Christmas Eve” I replied as Marley began to fade. He muttered something further about being visited by three more ghosts at the strike of 12 then buggered off.

The Running Ghost of Christmas Past

True to his word, at precisely midnight I received my first visitation. The figure’s unmistakeable 80’s short-shorts first came into sight. The ghost at first forgot his purpose, unable to resist a few questionable anecdotes on how much faster everyone was back in the golden era on a diet of beer, curry and 150 mile weeks.

“But spirit tell me, how accurate really were courses back…

“For I am the Running Ghost of Christmas Past – now follow me”.

So I did. The ghost took me back to where it all began – my first race at five years old. It was the local five mile village fun run where my dad paced me around (not much health and safety back then, all the kids did it – there was even a key stage 1 trophy up for grabs!).

Quickly, the spirit guided me through my adolescent years, school cross country and athletics trips, my mediocre stint as an 800m runner and then onto my undergraduate days at Birmingham University. I saw all the wonderful friends I’d made through running, all the fun and laughs we’ve had on runs whether they be pre-9AM lecture shakeouts, blood curdling sessions or hungover hobbles.

“Look spirit – look how happy I look!” The beginnings of a smirk began to be betrayed beneath the spirit’s handlebar moustache.

Then after collecting my thoughts “But I can just as easy still see all my friends and support at races if I packed in the running – Bah!
With that, like old Marley the spirit began to fade. Partially because his work here was done, but also because he had just heard that something about Parkrun had been posted on Facebook, thus urgently necessitating his input.

The Running Ghost of Christmas Present

The ghost came in with a crash. He had to jog a few laps of my bedroom because his GPS read 9.98 km. Even then, the spirit was obviously hurried, unimpressed by my poor WiFi that was delaying him from plastering a Strava activity screenshot on all his other social media channels.

“I am the Running Ghost of Christmas Present” exclaimed the spirit with an air of irritation, at last lowering his phone. “Follow me… also on Instagram – my handle is @xmasrunningghost2”.

I was transported to the house of my friend whom I shall refer to under the appropriate pseudonym of Tiny Tim. All poor Tim ever wanted to do was run.

Sadly, he hadn’t been very lucky in the genetic or biomechanical lottery. Plagued by lingering injuries for nearly a decade, the only running Tim’s poor over-pronated feet could manage was loops of a 300m field day after day. Yet how grateful he was of even this small pleasure.

“Oh spirit, how selfish I have been. Why if Tiny Tim can find so much pleasure in running with such geographical restriction, then what right do I have to complain?

“Are there no workhouses or prisons for such pathetic cases” mocked the spirit. “What are you talking about?” I replied. “Oh maybe that was somebody else…” the spirit confessed, confused and with a snap of his fingers I was returned to my room.

The Running Ghost of Christmas Future

As the clock struck 12 for the third time I shuddered for I knew the time had come for my final ghostly visitation. The ghost was more horrifying than any of those that had proceeded him. Towering over me at 10-foot tall upon 30 stacked carbon plates I began to stammer.

“I know I am in the presence of the Running Ghost of Christmas yet to come” said I. “I fear you more than any spectre I have seen tonight”. The towering spirit answered not. Instead it pointed onward with its hand. Once again, I followed.

It was Christmas day. My grandchildren and future self were sat around a holographic TV that was showing a documentary about the evolution of marathon running. As the first sub 1.50 marathoner came onto the translucent screen the little girl turned and innocently asked:

“Grandad – how good were you at running?”.

My aged self replied: “I was quite good, but of-course you have to remember the standard in those days was much higher… I winced.

“And of course I stopped at 22 I could have been much better” I cringed again. A short time passed before the little girl’s curiosity once again got the better of her.

“Did you ever run a marathon?”. The room went deathly silent. I tried to shout out but nobody could hear nor see my protestations.

“ENOUGH! Spirit I beg you to show me no more. I will change, I will continue to run please I beg you have mercy on my wayward soul

God bless us, everyone!

I awoke and immediately ran to the window – it’s not too late I cried!

“Hey you there sportshoes.com – are those expensive, well-structured trail shoes still available”?

“Why yes sir and if you add this item to your basket now we can guarantee one day delivery.”

“Thank heavens, I’ll take two and chuck in some more of those socks!”

Instead of continually over-training to squeeze as much as possible into every single week I tried to maximise how many weeks in a row I could run a more moderate amount of miles (~60 per week). Among many of the things far better detailed in my last more serious article “Stop copying and start personalising”, I started to adapt my training to my own needs.

I stopped hammering sessions at 100% all year round, I ran miles even easier on recovery days and stopped doubling in favour of pure singles to allow myself a bit more sleep. I also tackled my insomnia head on, but that’s another article in itself. Is it worth all the toil and trouble?

Many, if not all athletes at some point or other face this conundrum of whether it’s really all worth it. I don’t mean to trivialise this issue. There are some perfectly legitimate reasons why an athlete may want to pack in competitive running and many reasons why at the very least a break may actually be an advisable course of action.

However, taking a look at what running means to all of us from a past, present and future perspective can help to ground us and at least stop us from catastrophising. Maybe the problem isn’t the sport itself but just the way we are playing it.

Tiny Tim spoke to me very recently after a festive parkrun and, despite running far short of his potential said “you know, even if my body doesn’t allow me to ever run 50-60-70 mile weeks and I can’t fulfil my competitive ambitions. I really enjoyed being a part of a run like that and don’t want to give that up”.

Merry Christmas Fast Runners and God bless you, everyone!